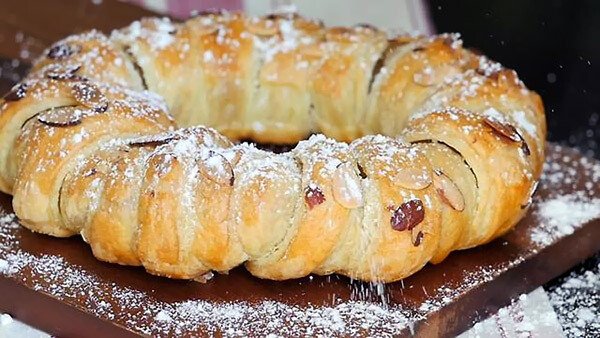 Thoroughly grease a 10 to 12 cup microwave safe Bundt pan with shortening; sprinkle with 1/2 cup of the chopped walnuts to coat evenly. Sift flours, baking powder and baking soda; set aside. Cream butter and sugar until fluffy; beat in eggs one at a time. Stir sour cream or yogurt, banana and liqueur into egg mixture. Combine flour mixture with banana-egg mixture; stir in remaining walnuts. Spoon into prepared pan. Place on top of a microwave-proof bowl in center of microwave. Cook on medium for 10 minutes then on high 5 to 7 minutes until cake tests done turning twice. Let cake stand 15 minutes. Turn out Christmas Ring onto serving place. Let the Christmas Ring cool.

Christmas In The Caribbean

Grotesque masks, jigging Jonkonnu dancers and acrobats, ghost stories, Spanish music and pepperpot these seem far away from carols, mistletoe and chestnuts roasting on an open fire. But they are Christmas traditions in various islands in the Caribbean where the birth of Jesus Christ is celebrated with cultural gifts from many different roots.

European colonists brought Christianity to the Caribbean, originally to the native Arawak and Carib Indians, though not many of them survived to practise it. Today, European Christmas customs survive everywhere across the region: Christmas morning services in the established churches, feasting on Christmas Day, wassailing or serenading, dances, the giving of gifts and Christmas cards, Santa Claus and Christmas trees.

When Africans were brought to the Caribbean as slaves to work on the sugar plantations, they added to Christianity their own customs and, right away, the festival began to evolve and take on a character of its own.

In Jamaica, fearsome duppies (ghosts) roamed the countryside at Christmas, the most legendary being Three-Foot Horse, whose terrifying approach was heralded by the sound of irregular hoofbeats, and Rolling Calf, who weakened the hearts of rural folk when he shuffled by, dragging chains along the pathways at night.

These stories probably date back to the plantations: slaves customarily went up to the great plantation house on Christmas morning to serenade its occupants with songs. Rewarded with a two-or three-day holiday, they made the most of it in their own gardens, reaping provisions both for food and to sell among themselves at the Christmas market.

In the plantation era, Christmas was not only festivity: it was a very serious time in the islands, and the three-day holiday for slaves always brought rumours of uprisings to the masters’ ears, some of them true. Research for the Museum of Antigua and Barbuda by Desmond Nicholson, for example, uncovered a dramatic case from 1710, when a planter named Sam Martin was killed by slaves on December 27 because he had not given the customary Christmas holidays. In 1813, just before the abolition of slavery, it was reported that “Every Christmas brought alarm, and the militia was called out to prevent insurrections.”

For more about Christmas In The Caribbean see this link