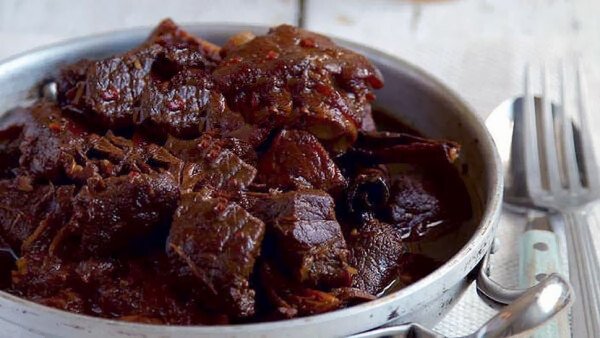 Drain the peas and return them to the medium saucepan with enough fresh water to cover by 1 inch. Bring to a boil over high heat, reduce the heat to low, and simmer until the peas are tender, about 1 hour. Drain again.

Meanwhile, in a 6-quart Dutch oven or soup kettle, bring the corned beef, ham hock, and water to a boil over high heat. Reduce the heat to low, and simmer until the meat is tender, about 1.5 hours.

Drain the meat, reserving both the meat and the cooking liquid. Remove the meat from the ham hock and chop it coarsely; discard the bones.   In a 6-quart Dutch oven or soup kettle, heat the oil over medium heat. Add the onion, scallions, garlic, and chili pepper. Cook, stirring often, until the onion has softened, about 4 minutes.

Stir in the tomatoes, tomato paste, chives, and thyme, breaking up the tomatoes with a spoon. Bring to a boil, reduce the heat to low, and simmer for 10 minutes.

Stir in the eggplant, calabaza, and white yam and cook for 5 minutes, stirring often. Stir in the reserved meat cooking liquid and the meat. Bring to a boil, reduce the heat to low, and simmer, stirring often, until the vegetables are tender, about 20 minutes.

Stir in the cooked pigeon peas and the spinach, and cook until the spinach has wilted, about 5 minutes.
Season with the pepper, to your taste depending on the hotness of the chili pepper.

In the Caribbean, British planters quickly became the minority to African slaves. Many of the planters were so focused on returning to England wealthy that they made little effort to re-create English culture and, instead, slaves were allowed to retain and cultivate an African-American cooking aesthetic. By one estimate, “80 percent of British imports of Gold Coast slaves went to Jamaica, the largest British sugar-producing region in the eighteenth century.”

In Jamaica, planters supplied slaves with weekly rations of salted fish and set small parcels of land aside for their slaves to cultivate produce and raise animals on Sundays. Slaves in Jamaica managed to raise fowl, pigs, vegetables, and rice. What slaves did not use to supplement their rations, they sold on Sunday, the traditional market day and a free day for slaves. With their earnings they purchased salted beef or pork. They then combined the meat received as rations and purchased at market with produce from their gardens to prepare a spicy creolized stew they called oglios, or pepper-pot. Today it’s a traditional dish throughout many parts of the Caribbean.