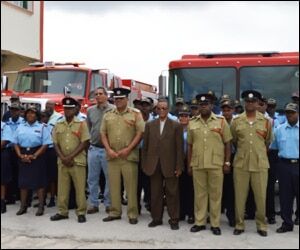 In an effort to effectively and efficiently safeguard lives and property in the Federation, the St. Kitts and Nevis Fire and Rescue Services (SKNFRS) recently commissioned two new fire trucks, and Everette O’Garro, Chief Fire Officer (CFO) said that this represents the fire departments’ continuation of fleet renewal initiative.

At a brief ceremony on Thursday, January 28, the CFO said the initiative commenced in 2010 and is strongly supported by the Government.

“This initiative which has now received full support and backing of the present Government is part of a master plan that is geared towards enhancing and improving the overall effectiveness and efficiency of the Federation’s fire and rescue services,” he said, while adding that the commissioned vehicles were manufactured at the highest standard by Rosenbauer America.

O’Garro mentioned that great consideration was given to many factors before purchasing the fire trucks. Such factors included the number and types of extinguishing agents the trucks would carry, the equipment and personnel to be carried to the scene, the response times and objectives to be met, as well as the local weather and terrain likely to be encountered.

“In fact, due to the alarming increase of bush fires that we have been responding to over the past two years, the type 32 brush patrol which is destined for the Sandy Point zone was specifically designed with a wild-land interface,” said the chief fire officer. “This gives it the capabilities to undertake operations in the very rough terrains, while at the same time maintaining its municipal capabilities.”

CFO O’Garro extended profound gratitude to Indocom engineer David Beard for his invaluable support, guidance and technical advice in respect to the selection and designing of the fire trucks. Special thanks was also given to Matt Kraner, representative from Rosenbauer America, who has been in the Federation assisting the SKNFRS with the training of staff in the efficient operations of the trucks.

“He has the very important task of keeping the fleet of our emergency vehicles in a state of readiness and preparedness to respond to emergencies when called on to do so,” he said, adding that he is ably assisted by Oriel Seaton, Maintenance Engineer from the Solid Waste Agency. “Both men from all accounts have been doing a remarkable job.”

The chief fire officer reiterated the timeliness of the commissioning of the trucks and stated that they represent good value for the money invested. He explained that they would afford the SKNFRS the added benefit of assisting in the achievement of its primary goals and objectives which are to protect and safeguard the lives and property of citizens and the general economy by preventing and reducing the dangers and effects of fires and explosions.