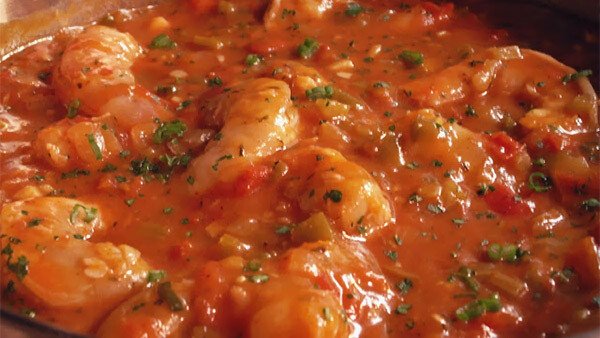 In butter, saute onions,  peppers and garlic. Add shrimp and cook for 2 minutes.  Add cubed tomato, salt and lime juice. Simmer for 2 minutes, thicken with a cornstarch slurry and serve over rice or couscous.  Garnish with a few pieces of a sprinkling of chopped scallions or parsley. This is an easy shrimp creole recipe.

Creole sauce is a fundamental dish of Cajun cuisine, which is usually used in preparing a wide range of dishes mostly prepared in New Orleans and its surrounding areas. The sauce is traditionally prepared by using a tomato base that can be made up of tomato sauce as well as canned tomatoes. Various types of ingredients and spices are included in the dish to prepare the final delicious sauce. This final sauce is typically cooked to get a thick consistency, which is needed to cover the food. Furthermore, this sauce is also used as an ingredient while making a number of dishes including grilled sausage, rice and beans, chicken and fish combo, or even on a simple sandwich.

The traditional Creole sauce has been a part of Cajun cooking traditions for over 200 years. Cajun cooking traditions are the cooking methods and practices followed “Cajun” settlers deported from Acadia by the British. However, the modern Creole sauce was actually introduced to the world by New Orleans. Chefs of New Orleans used this sauce to present their wide range of dish deliciously. In Cajun cuisine, this Creole sauce is also called as “red sauce” or “red gravy.”