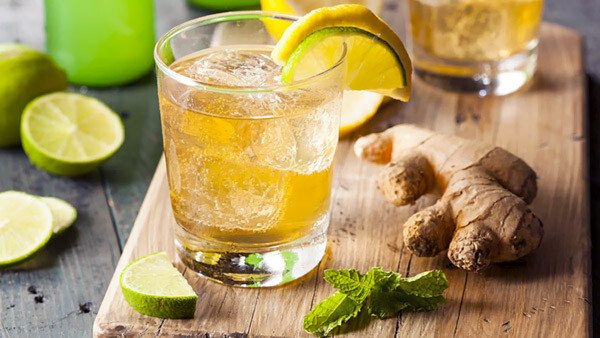 1. Wash, peel and grate ginger.
2. Peel and juice lime; keep the peel.
3. Mix ginger, water, cloves, lime juice and the lime skin.
4. Pour this mixture into clean bottles and leave to ferment for about one day, preferably in the sun.
5. Strain the ginger beer and sweeten to taste with basic sugar syrup (see below).
6. Refrigerate until ready to use. You can also bottle the Ginger Beer

Bring water to a boil in a small saucepan. Pour in sugar. Stir until sugar is completely dissolved. Remove saucepan from heat and allow contents to cool. Refrigerate in a sealed container until ready for use.

What Is Ginger Beer

Ginger beer ’s origins date back from the colonial spice trade with the Orient when having the control of the species was a symbol of power. It was popular in Britain and its colonies from the 18th century and with time it spread around Europe arriving even until all the American continent.

Ginger beer – often confused with ginger ale—is a slightly fizzy fermented drink with a pungent, spicy ginger flavor. But, contrary to its name, ginger beer isn’t a type of beer. In fact, it’s not even alcoholic. If you’ve made this mistake before, you’re not alone. Both having beer right there in its name, along with its popularity as a mixer in alcoholic drinks (like a dark and stormy), you’d be forgiven for mistakenly thinking ginger beer contains alcohol.

But there’s great news: If you’ve been avoiding ginger beer because you thought it was alcoholic, you’ve just discovered your new favorite booze-free cocktail ingredient.

Contrary to popular belief, ginger beer has never contained actual beer. In fact, it’s not even made via the same methods used to brew beer. The fermentation process involved in making traditional ginger beer is more similar to how hard cider is made. Not all modern ginger beers are fermented, either, which means there is absolutely zero alcoholic content.

Traditional fermentation methods tend to yield some amount of alcohol (however small), and add carbonation to the beverage. But some newer ginger beers get their fizz through forced carbonation (aka pressurized with carbon dioxide) instead of fermentation, which means they are alcohol-free.