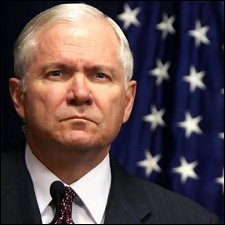 Speaking at a joint news conference Friday with seven Caribbean government and national security leaders Gates said he’s impressed by the innovative approaches being taken to promote collective security through the initiative.

Following what he called a “very productive” meeting to discuss furthering those efforts, Gates lauded the Caribbean nations’ work toward marshalling limited resources to address common threats such as narco-trafficking and violent crime.

Gates conceded that the drug trafficking problem has worsened due to the success of the Merida Initiative and Mexico’s crackdown on drug cartels there.

Going forward, Gates said he would like to see broader efforts to connect the regional security system here with efforts under way outside the Eastern Caribbean. This includes efforts by the French, Dutch, Colombians, Peruvians and U.S. Southern Command’s Joint Interagency Task Force.

The secretary praised Barbados as a strong U.S. security partner and a leader in promoting security cooperation in the Eastern Caribbean.

“The United States stands steadfastly with you as you pursue long-term solutions to these problems,” Gates said after meeting with the Prime Ministers and national security ministers.

Much of that support is provided through the Caribbean Basin Security Initiative that President Barack Obama proposed last April during the Summit of the Americans in Trinidad and Tobago.

The initiative has been built with extensive input from Caribbean nations with a central role for the regional security system, Gates noted Friday, all aimed at helping regional governments face up to transnational threats.

The $45 million the United States has committed to the effort this year will help improve regional maritime patrol and interdiction capabilities and domain awareness and provide for additional joint training and exercises, he said.

Gates said details about how these funds will be allocated are being hammered out by technical working groups, with one convened Friday in Washington.

He emphasized that regional nations will be the ones to help determine how the funding can be most effective. The United States already has committed three interceptor boats and communications equipment, but Gates said he heard suggestions on Friday about the need for more law enforcement training and the stand-up of major crimes units.

However, Gates emphasized that the Caribbean initiative represents more as it provides a comprehensive approach to regional security. Its scope extends beyond military and security assistance to address equally critical components of the region’s economic and social stability.

The initiative aims to provide, “not just improved security capabilities to confront immediate threats, but also development assistance in hopes of addressing the root causes of regional problems, such as the lack of educational and employment opportunities, particularly for youth,” Gates said. “That is a strategy we strongly support.”