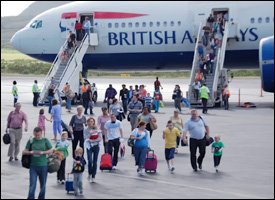 Tourism stakeholders in St. Kitts and Nevis have been urged to ensure that the new mid-week direct service to St. Kitts’ Robert L. Bradshaw International Airport by British Airways continues to grow.

“It is the responsibility of all stakeholders along with the government to do all that we can to grow the demand for our destination, grow the demand for our products and services and subsequently ensure that people keep wanting to come on these flights,” said Minister of Tourism and International Transportation, Sen. the Hon. Richard “Ricky” Skerritt, shortly after welcoming the BA Captain, who glided the carrier’s inaugural mid-week service from London’s-Gatwick’s International Airport.

“It is about making sure that it is good business for the country,” said Minister Skerritt, who added: “Tourism, is about making people happy, making them relaxed and getting away from their daily stresses and I think that St. Kitts and Nevis is one of the Caribbean’s destinations that is perfectly suited to achieve that. We can all make that happen on a sustainable basis, if we get out there and promote and put packages together and deliver goods and services that people want and need and are looking for.”

He expressed his optimism that these can be achieved on a continuous growth curve and added that the second weekly flight scheduled so quickly after just over a year “is an indication that we are making progress.”

“It is really a very good day for St. Kitts and Nevis,” quipped the Minister of Tourism, who was accompanied by tourism officials including including Advisor, Mr. Cedric Liburd; St. Kitts Tourism Authority Chairman, Mr. Alphonso O’Garro, mother Board members and Hotel and Tourism Association CEO, Mr. Michael Head.

BA’s flight captain, Alistair McLaren said it was his first flight to St. Kitts. “The crew was very well aware that the flight is an inaugural mid-week schedule and the passengers were delighted,” he said just before accepting a gift from Minister Skerritt.