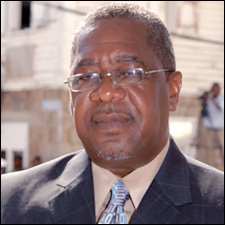 “I hope that the prime minister and other ministers will look at their own salaries and travel and the entourages they travel with to make saving.”

This was the sentiment of Opposition Senator Vincent Byron Jr. during his maiden presentation in the National House of Assembly . The freshman parliamentarian went on to state that the Labour Party Gov’t and it’s leadership must show real leadership and lead by example.

“I would hope that you would lead by example and make sacrifices yourselves and not just demand them from the people,” said Byron.

During the campaign for the just concluded General Election scores of senior civil servants were observed violating the General Orders by campaigning heavily for the ruling Labour party. Many persons reported seeing government vehicles after work hours being used for electioneering .

“Senior Civil servants were blatant in their open support of the ruling party as they actively campaigned sometimes during working hours,” said Senator Byron in a recent interview. “This situation was generated by the Labour party’s propaganda machinery which churned out the myth that PAM will fire 600 civil servants upon taking office. Many civil servants, knowing that they are past retirement age and have pressing financial obligations, were understandably motivated to protect their jobs; at least so they thought,” Byron continued.

The IMF has required that the civil service, which has been described as being bloated, has to be reduced as a result of the unsustainability of the current public service wage bill which includes salaries, wages, pensions and other emoluments as well as allowances.

PAM Senator Byron said ” The Labour government has used the civil service to cement its power by employing thousands more persons than could reasonably be supported. Labour party supporters were rewarded for partisanship with comfortable and secure government jobs where none existed. As in the case of the former  Attorney General Dennis Merchant for example who is still in that substantive post as General Counsel, two or more people were often employed in the same job. Those chickens are now coming home to roost”.

The Prime Minister informed the Federation in the Budget that the government will realize a savings of about $2 million per month. Since most of those over 55 years old are at K40 or above, an individual salary of about $4000-$5000 would translate to almost 500 persons suddenly out of work by September.

When we consider the over 800 youth up to age 35 years old that are semi ““ employed in the YES program and who are paid by the government and the desperate need to save money it is obvious that these youth will join the retired civil servants in the shrinking job market. With unemployment already in double figures the situation will soon be desperate and unemployment exceedingly worst.