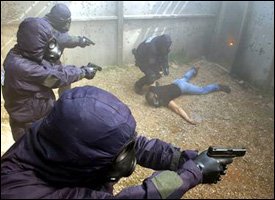 Advanced Interview Techniques To Be Taught

Deputy Commissioner of Police Mr.Stafford Liburd, officially declared a one week training course on interviewing terrorists, at the Marriott Hotel.  The course which runs from March 30th to April 4th is sponsored by the United States Government, and facilitated by the Office of Anti-terrorism Assistane (ATA).  The ATA was formed as a major initiative against international terrorism and provides training and related assistance to law enforcement and security services worldwide.

In addressing the opening ceremony Assistant Secretary in the Ministry of National Security, Supt. Ivor Blake, said the Ministry of National Security is committed to provide the relevant training opportunities to the members of our security forces to provide them with the skills, tools and resources necessary to carry out their duties on a daily basis in order that they can deliver the professional services to the communities and the country they serve.  He said further, the development of the human resource capacity  has been one of governments focus and the Ministry intends to achieve this with the collaboration and support first of local stakeholders, of friendly governments such as the United States and other governments, organisations both regionally and internationally.

In declaring the course open, Deputy Commissioner Liburd said that 911 has shook the world, re-arranged modes and means of travel, and drastically changed our experience at airports.  He said further, that terrorism threatens security globally, and as the Caribbean region depends largely on tourism for its economic survival, it is imperative that a safe and friendly environment be maintained.  He reminded participants that they must vigorously protect our nations, but they must do so within the ambit of the law, even though terrorists, who are criminals, do not play by any rules.  He welcomed the visitors to the Federation and wished them an enjoyable stay.

Twenty-four police officers from around the region, including six (6) from St. Kitts-Nevis are attending the course.