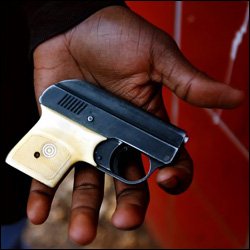 St. Kitts and Nevis will be among 10 Caribbean countries which will sign an agreement with the United States to make the tracing of illegal weapons easier.

Commisioner of Police, Mr. Austin Williams will sign the Memorandum of Understanding on behalf of St. Kitts and Nevis with the Bureau of Alcohol, Tobacco, Firearms and Explosives (ATF) to provide for the electronic tracing of illicit firearms under a system called eTRACE.

The signing is part of an ongoing effort to combat firearms trafficking in the region consistent with the joint December 2007 CARICOM-U.S. Initiative on Combating the Illicit Trafficking in Small Arms and Light Weapons and Ammunition.

Other signatories to the agreement are Antigua and Barbuda, Barbados, Dominica, Grenada, St. Lucia, St. Vincent and the Grenadines, Aruba, Curacao and Anguilla.