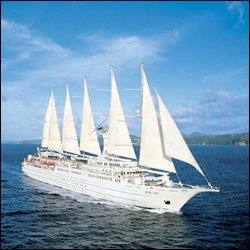 Two of Windstar’s three-ship fleet of luxury yachts will drop anchor in St. Kitts and in Nevis during the upcoming 2009/2010 Cruise Ship Season.

St. Kitts, expected to receive over 500,000 cruise passengers next season, along with Nevis, are among the world’s most treasured destinations as the luxury yachts explore hidden harbors and secluded coves during 31 Caribbean sailings from November through March.

The 312-guest Wind Surf offers 7-day roundtrip sailings in fall and winter from Bridgetown, Barbados calling on a variety of vibrant ports on northbound and southbound itineraries.

The company has been recognized by some of the most notable names in the travel world. Windstar was recently awarded “Favourite Small-Ship Cruise Line” in the U.K.’s CondÃ© Nast Traveller’s 2008 Readers’ Travel Awards.

Windstar received the highest score of any cruise line in the poll and was also only one of three cruise lines in CondÃ© Nast Traveller’s list of the “Top 100 of the Best the Travel World has to Offer.”