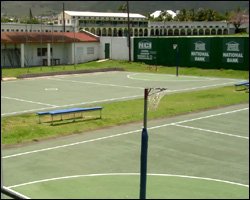 Netball has scored big thanks to a tag team effort between the Department of Sports and the St. Kitts-Nevis-Anguilla National Bank.

The two entities came together to renovate the courts at Netball City by installing a completely new playing surface, and enhancing the ambience of the facility by painting walls and power washing the stands and pavilion.

The project cost more than E.C. $20,000.00 and President of the local Netball Association Juliet Hanley-Liburd told SKNIS that she is conscious of the many demands that are placed on Government in relation to sport, and thus felt compelled to secure additional funding which could complement Government’s contribution to the renovation.

“Government can’t do everything,” she noted. “We approached National Bank and they said that did not have it in their budget (for 2009). They promised that they were going to try to put something in the budget for this year, which they did, and I really, really appreciate them doing that.”

“If you go into Netball City, you can see that we have two new beautiful courts,” Mrs. Liburd stated, adding that the monies for the renovation was given in addition to the usual sponsorship funds from the bank. “We are truly grateful.”

Dave Connor, Director of Sports in the Ministry of Tourism, Sports and Culture, commended Mrs. Liburd for her drive to promote the sport of netball and her initiative in forming meaningful partnerships with the Department of Sports and the corporate community. He encouraged the leadership of other sporting associations to form similar relations with stakeholders.

The relationship between the netball association and National Bank was described by Mrs. Liburd as an “excellent one” and she praised the institution’s executives for their personal support and commitment. She also applauded other companies that continue to sponsor individual teams in spite of the challenging global economic climate.