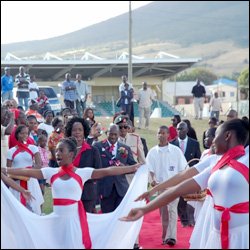 The crowd witnessing the swearing-in of a new St. Kitts-Nevis Labour Party Cabinet for a fourth consecutive term of office, erupted into applause several times as the Minsters-elect arrived to take their Oaths of Allegiance, Office and Secrecy during a ceremony at the Warner Park Cricket Stadium on Sunday.

As each of the six ministers and the two appointed ministers arrived, the crowd gave a standing ovation and erupted into loud applause.

But the loudest applause and cheer was given as the State car came into sight and as Prime Minister and Political Leader of the St. Kitts-Nevis Labour Party, Hon. Dr. Denzil L. Douglas, alighted the black sedan.

A red carnation was pinned on the jacket of Prime Minister Douglas and as he walked along the red carpet to his seat, the crowd roared louder and louder as he waved and acknowledged their out pouring of love and support.

Youths dressed in while flowing skirts with red sashes greeted the Prime Minister and other incoming Cabinet ministers.

The twin-island federation’s leader personally greeted those with outstretched hands.

On his way to his seat, Dr. Douglas was also greeted by other invited guests including OECS Director General, Her Excellency Dr. Len Ishmael and visiting Prime Minister of St. Lucia, the Hon. Stephenson King, who graced the historic occasion with their presence.

Dr. Douglas said it was with a great sense of gratitude and humility that he stood before the mammoth crowd as Prime Minister to present a valiant team of Ministers Designate that will govern the affairs of the nation over the next 5 years.

“I am truly thankful to the people of St. Kitts and Nevis for coming out to vote in the General Elections in such large numbers and for demonstrating so overwhelmingly their support for the progressive Labour Team that contested the Elections,” he said.

Prime Minister Douglas said he was humbled by the confidence that “you have reposed in me and in the Labour Administration that I lead, by re-electing us to office to serve you for another term, the fourth consecutive term.”

“I consider the goodwill you have demonstrated and your faith in the leadership of Labour as a call to even greater service; a call for us to continue reaching out in love and humility to the citizens and residents of St. Kitts and Nevis in every walk of life; a call to be attentive to the concerns of each individual of our beloved nation and to be even more responsive to the needs of our people in the various communities around St. Kitts and Nevis,” said Dr. Douglas.

He added that the overwhelming support is, “in my view, a call for us as leaders to foster greater unity among our people and bring to bear the combined talents and resources of our people on the problems and challenges we face, with a view to accelerating the pace at which we build a new society of which every Kittitian and Nevisian would be proud.”