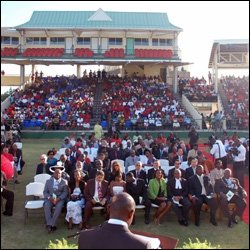 St. Kitts and Nevis Prime Minister Hon. Dr. Denzil L. Douglas says reduction in the national debt, growing the economy, completion of several projects and public sector reform, will be among the hallmarks of Labour Party’s fourth term in office.

Addressing thousands of nationals witnessing the swearing-in of his new nine-member Cabinet on Sunday at the Warner Park Cricket Stadium and the live broadcast on radio, the internet and television, Prime Minister Douglas said he considers the massive victory given to the Labour Team as an endorsement of the campaign slogan “Progress not Promises” and an indication that “you share our view that “It is working”; that the policies, programmes and projects are working for the benefit of all of our people.”

He said his new Government fully appreciates the endorsement of the plans and programmes that the Labour Administration has so successfully implemented over the past 14 years.

“It is not an indication that everything is perfect. We know that there are still a number of issues of concern to each of you and we are fully aware that there are many critical social and economic problems that must be given urgent priority in the years ahead,” said Dr. Douglas.

He said that the size of the National Debt is an issue that must from time to time capture the attention of every national of St. Kitts and Nevis.

“Hence, although our people can see and feel the enormous positive impact of the many projects funded by the debt, and we are satisfied with the progress that we have been making in dealing with this issue in the context of numerous challenges of global origin, we will not let down our guard. We will be even more vigilant in collecting outstanding revenues, controlling expenditure and securing fiscal surpluses on an ongoing basis. We will also examine and reform the entire tax system with a view to ensuring that coverage of our tax system is more comprehensive, and the tax burden is shared in a more equitable manner while at the same time our low-income groups are afforded greater protection,” said Prime Minister Douglas, before the Oaths of Allegiance, Office and Secrecy were administered.

He said that the entire Cabinet will play a role in fiscal management and debt reduction and will ensure that there are even more frequent reports submitted to Cabinet on fiscal performance and debt management, and that every project or initiative that comes to Cabinet for approval is accompanied by a careful analysis of its cost and benefits and its impact of the national debt in the short term and the long term.

“Our aim is to bring down the debt dramatically, so that we may divert a greater and greater proportion of our limited resources from debt servicing to people-oriented development initiatives,” said Dr. Douglas, adding:

“We believe that one of the cures for high debt is the reduction in the size of the Government through the privatization and commercialization of public enterprises and activities that are best suited for private sector operations.”

He said Government plans to accelerate the privatization and commercialization programme while, at the same time, ensure that even those entities that must of necessity remain in the public sector, improve their operational efficiency and carry out their mandates in a more business-like manner.

He said his Labour Team also understands that many people are concerned about their ability to find jobs or to secure their existing jobs and the issue has assumed great dimensions because of the global financial crisis that has been destroying jobs all over the face of the globe.

“Our YES programme has undoubtedly provided relief to our young people in particular, and has equipped them with skills that will enhance their ability to secure a place for themselves in the job market. However, we must continue to grow the economy if all of these workers and the new school leavers are to be fully absorbed into our economy as employees or as entrepreneurs,” Prime Minister Douglas said.