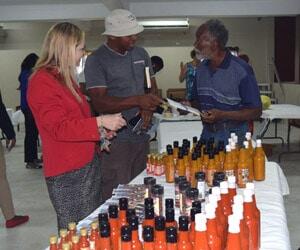 Following a media launch of restaurant week held on April 13, a number of local businesses came out at the Department of at the Agriculture Conference Room on April 14 to showcase various products which they have to offer to restaurants and hotels.

Kathleen Pessolano, Consultant Supporting the Ministry of Tourism, stated that the Agro-processing Showcase provided an avenue to promote local sourcing of ingredients in St. Kitts and Nevis and also feature local cuisine and dishes of this year’s main ingredient, pumpkin.

“We really wanted to create an opportunity for local suppliers to meet especially with restaurants in this kind of exclusive setting so that restaurants can get to know some of the local suppliers that they might not already know about and can start developing a customer supply relationship with them,” said Ms. Pessolano.

She mentioned that last year’s restaurant week was an incredible success and she is looking forward to the success of this year’s week. Over 30 restaurants will be participating this year. Ms. Pessolano added that restaurants that did not participate in last year’s event are now on board.

Representatives of various restaurants expressed their pleasure in being able to sample the local products and said they are looking forward for the opportunity to incorporate them in their menus.

Director and Owner of Carambola, Daislyn Sharpe, stated that the restaurant tries as much as possible to use local products as many tourists that visit are interested in the flavors of the Caribbean, in particular St. Kitts and Nevis.

“Our local pumpkin features very nicely on our menu, both in our a-la-carte dinner, lunch selections, as well as our deserts,” she said.

Carambola’s Head Sushi Chef, Richmond Milaire, said that he is looking forward to using pumpkin in his sushi dishes. He commented that he enjoys creating sushi dishes from local produce as they are not usually featured on sushi menus.

Director of Food and Beverage at Marriott Beach Resort, Thierry Delarge, went to the event to not only source local items available for the retail shops there but to learn what is being done in St. Kitts and Nevis.

“There are a lot of tourists and guests that would probably be interested in taking home some of the pickled pumpkin or pumpkin wine,” he said, referencing some of the items available at Sweet Little Things. “We like to see what is also done in terms of the craft such as the ice creams and cakes which are pretty good actually.”