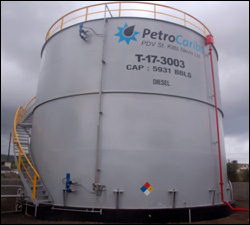 A new six thousand barrel of diesel storage tank will significantly increase the capacity at the Needsmust Power Plant to store more fuel than it has done in the past.

Speaking at the handing over ceremony of the 5,900 barrel tank financed under the Petro-Caribe Agreement, Permanent Secretary in the Ministry of Energy, Mr. Oaklyn Peets said Needsmust Power Station uses over 700 barrels of fuel per day with a monthly cost of over EC$5 million dollars.”

“An increase in the storage capacity is necessary given the disruptions to trade in supplies especially during the hurricane season when rough seas prevent shipping of gas oil to the various countries,” said Mr. Peets, who added that the fuel tank represents an enduring commitment between the Government and People of St. Kitts and Nevis and the Government and People of the Bolivarian Republic of Venezuela.

“This fuel tank which is being handed to the Ministry of Energy is an integral part of the framework of the PetroCaribe Agreement.” This is designed to provide a platform for the development of energy policies that would directly benefit the people of St. Kitts and Nevis,” said Mr. Peets who pointed out that the Government is the largest consumer of fuel on the island but has the least amount of storage capacity.

Mr. Peets said that the construction of the tank began some two years ago after a period of lengthy discussion and negotiation between all parties. ”

He said the object of the Ministry is to develop sufficient storage facilities on the island, thus reducing the regularity and frequency of shipments. “In the not too distant future, PDV St. Kitts Energy Ltd will proceed to construct premises to accommodate six (6) additional tanks to augment existing supplies.

“This proposed development will do much to improve our capacity and reduce vulnerability. “As the Power Station expands, the need for additional storage becomes more and more acute. As the generating capacity increases, so does the storage capacity both of which are contingent upon increasing demands from the general consuming public,” said Mr. Peets.

In his welcome remarks, Assistant Secretary, Mr. Paul Lloyd it is the first tank to be owned be owned by the Government of St. Kitts and Nevis.

“There are other tanks built by other service providers and although those tanks were positioned commissioned some fifty (50) years ago. They still remain the property of those who built them,” he said.