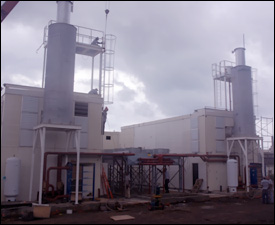 All of the major components have been installed at the site of the two new generators.

This has been disclosed by Superintendent at the Needsmust Power Plant Mr. Kevin Bennett, who said that mainly finishing work is being carried out at the moment on the two 4.0MW Holeby gensets from MAN Diesel.

He added that the only work which remains is complete are some pipe work, electrical connections as well as some finishing work on one of the buildings.

Mr. Bennett said one of Electrical Commissioning Engineer is expected to arrive Tuesday from Singapore to begin work on commissioning all the electrical components.

Mr. Bennett disclosed that the MAN commissioning Engineer arrives on October 11th and will be responsible for the commissioning of the engines.

Two more generators are expected to arrive here shortly and are expected to be commissioned by February next year. The four gensets were purchased at a cost of US$22 million.

The largest engine at the Needsmust Power Plant, a 7.6 MW set, was damaged by fire in 2008 and two Caterpillars sets purchased between 1989 and 1995 had to be removed from service due to their long history of failures and problems, poor fuel efficiency and extreme unreliability.