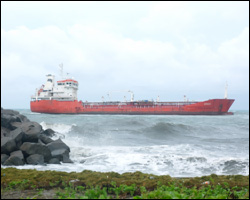 St. Kitts and Nevis’ Director of Maritime Affairs, Mr. Mc Clean Hobson said Tuesday afternoon a tug from the Dutch island of St. Eustatius is on its way to dislodge a Turkish-flagged oil tanker which broke its mooring in the Basseterre harbour Monday night due to rough weather.

“At about 8:00 PM (Monday) it broke its moorings due to rough seas and was grounded on the seabed, just offshore. The stern is seated on the seabed and the bow is moving around,” said Hobson. It had already discharged 3,900 barrels of diesel,” said Mr. Hobson.

He told the Communications Unit in the Office of the Prime Minister (CUOPM) he expects no oil spill as it is a modern vessel with double hull.

“But again, anything can happen and we are monitoring the situation,” said Hobson.