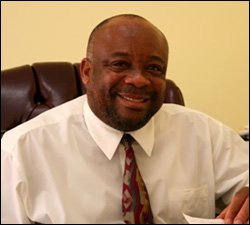 The youth of Nevis have been urged to practise forgiveness, since there was no future without it. They have also been encouraged to end the desire for revenge.

Minister of Youth and Social Development in the Nevis Island Administration Hon. Hensley Daniel made this appeal on Thursday as he heralded the start of Youth Month from April 1st to 30th. The Youth Division in the Ministry of Social Development set aside the month under the theme “Honouring Diversity Fosters Unity”.

“End the desire for revenge. Bear in mind that forgiveness is a gift you give yourself. To carry malice is heavy and I want those who are seeking to retaliate to think of the value of forgiveness.

“I want parents to sow fertile seeds of goodwill, care, compassion and reconciliation in the minds of young people so that we can reap a harvest of unity. Anger, impatience, hostility and easy arousal have to be kept at a minimum, so that we can achieve the objective of diversity,” he said.

Mr. Daniel noted that although he was aware of the concern about challenges faced by todays young and how they coped with them, his task as Minister of Youth was to expand the range of opportunities and create an enabling environment to foster the development of the island’s young.

He underscored the need to promote diversity for the advancement of the young which he believed would help the young people to turn away from crime, violence and drug abuse.

“These have a negative impact on the young and collectively, we must move to reduce the incidence of crime, violence and drug abuse. Youth Month therefore, affords us the opportunity to call into question or reflect on what we have been doing to promote and sustain youth development,” he said.

The Youth Minister also pointed out that the theme was relevant at this time, given the failure of many persons to appreciate the value of development.  He said it suggested that there was strength in differences and that the society could benefit from diversity.

Mr. Daniel used the opportunity to enlist the support of the family, school, church and community to help sustain the Judaeo-Christian values on which the society was founded.

“The values of discipline, hard work and honesty, I call upon the adults in society to hold on to these values so that today’s young may be led by example. The adults must help to harness the energies of the young and channel them into productive pursuits.

He explained that since the sitting Nevis Island Administration came into office in 2006, it had introduced a number of programmes to help the young. The Department of Social services was restructured and young people were appointed to boards of every public corporation; the Probation and Child Care Services and Gender Relations were re established.

The Youth Enterprise Scheme which fostered the growth of businesses was established; the Sports Programme was rationalised to include coaching and physical education and the upgrade of maintenance facilities to help young people widen and deepen participation in sports.

In light of the tendency toward gang violence, Mr. Daniel said, an appreciation for diversity was relevant but working toward unity was important. He said it called for teamwork, collaboration and mutual respect for each other.

He further urged persons to participate in the Month’s activities which included cultural presentations, a heavy focus on the Bike Not Bombs Programme, a consultation with youth leaders and a recognition programme for young people.