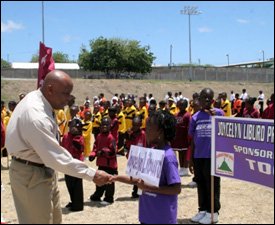 Minister with responsibility for Youth and Sports on Nevis Hon Hensley Daniel expressed hope that the interest exuded by primary school students, would be sustained and reflected in their school environment and the community.

He made the comment on Thursday, one day after a show of athletic excellence at the annual Gulf Insurance Inter Primary School Championships in Grove Park.

“I am hoping that we could sustain the level of interest in the children. We have had a level of a drop off in interest at high School. I saw something yesterday which spoke to the kind of organisation and a zeal for sports which I hope to have the officers and respective people capture.

“I want one thing to happen. I want the parents and teachers and the students to carry that level of preparation and organisation into academic work, into the social development so that we don’t only leave organised effort solely for the primary school competition,” he said.

Mr. Daniel underscored the need to see the sustained interest in preparations for upcoming exam and parents, teachers and the community would work together working together for the children’s academic success.

He said the level of interest showed by all in preparation for the sports meet indicated to him that it was possible to get the motivation going and to get the children focused.

“When I see the kind of preparation – the children getting up early in the mornings going for training; checking on their diet; ensuring that they get enough sleep – all of these are required for success at the academic level and I want the same approach to be there,” he said.

The Minister noted that he had already held discussions with the various sporting bodies on the island to utilise 4-6pm for sports and would continue to insist on it instead of their demand for additional time allocations in the school curriculum.

He said at the moment work was already on the way with cricket and football but noted that it was important that the parents collaborated in the effort.

“We want the parents to assist us in terms of making sure the children come  and we will have to provide the necessary transportation and so on but that’ s a block of time we can use going forward to advance track and field in Nevis,” he said.