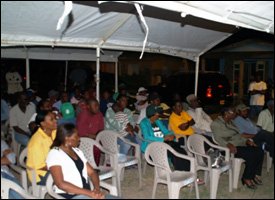 On Tuesday evening, Premier of Nevis, Hon. Joseph Parry laid out the well constructed plans of his government’s vision of additional growth to a sizeable crowd in Cotton Ground, at the most recent Town Hall meeting to be held on the island. He boldly informed the gathering about Phase One of his Nevis Reformation Party (NRP) led Government’s Stimulus Package.

In his presentation, the Premier boldly informed the gathering that the land at the beach was purchased by the Nevis Island Administration for the fishermen of Cotton Ground. He also noted that the vicinity in Cotton Ground known as the Market area has been fully paid for by the Nevis Island Administration and the property is now owned by the people of Nevis.

In a continued effort to keep the young people of Cotton Ground occupied and empowered, the Premier declared that the old Cotton Ground Police Station will be refurbished and turned into a temporary community center. The center will have an internet area, library, a meeting locale and a cooking facility available for the residents of Cotton Ground.

The construction of a new Police Station in Cotton Ground and the addition of classrooms to the St.Thomas’ Primary school will also be considered as sources of income as the Nevis Island Administration seeks to employ local people to facilitate these projects.

The Premier and his cabinet have exemplified their constant endeavor to ensure that residents of Nevis receive training and/or employment. He stated that last year a number of young men received training in Trinidad and more recently the Deputy Premier of Nevis, the Hon. Hensley Daniel went to Cuba, where negotiations were held to discuss the education and training of young people who are interested in a variety of fields including Nursing.  Mr. Parry made it known that a young man from Cotton Ground will soon be attending a University in Cuba to study Architecture.

“It is important that residents of Cotton Ground receive employment. In the next few weeks as we complete the local construction projects in Cotton Ground, I expect the persons who bid on the projects and receive the contracts, to employ the men and women of Cotton Ground to fill the positions,” commented Premier Parry.

While wrapping up his message to the people of Cotton Ground, the Premier received a thunderous applause as he expressed how extremely good he felt to observe a large number of young people in attendance at the Town Hall meeting.  “I look out on this large crowd and I see civil servants, hotel workers, students and people whom I have never seen attend an NRP meeting in the past. This tells me that the government is doing many things right and I am very pleased to see that we have young juice among us, who are very interested in driving this government machine forward,” he exclaimed.