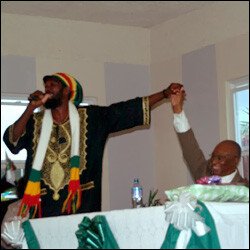 At the Nevis Reformation Party Convention, held at the Occasions event hall on Sunday May 17th, delegates representing the five constituencies on Nevis all voted to retain the Hon. Joseph Parry as leader of the ruling political party.

Hundreds of party supporters and delegates on Nevis and throughout the Diaspora came out in a show of support at the 2009 Nevis Reformation Party convention held under the theme: Visionary leadership, New Energy, New Opportunities.

After a regal procession of the delegates from each of the five constituencies, the Convention was called to order by Party Chairman, Mr. Herman Liburd. Miss Rhyana Wong presented a splendid rendition of the National Anthem, and the invocation was given by the St. George Parish candidate, Mrs. Patsy Hanley.  The packed audience then broke into a selection of choruses, led by well known Nevisian artist, Wrenford Dore and company.

Entertainment for the evening included performances by the Rhythmz Dance Theater, King Meeko, with his beloved hit “Nevis Nice” and the crowd pleaser Nutsy, who belted out his latest hit, Miracle Man, lauding the work of the Premier of Nevis, the Hon. Joseph Parry.

After the Secretary General’s Report was delivered by the Hon. Hensley Daniel, Resolutions were read by a delegate representative from each constituency.

The building, which could comfortably seat close to 1000 persons, was literally bursting at the seams, with a crowd which spilled out into additional seating under an event tent pitched alongside.

Party leaders were visibly elated by the great show of support given by the people who elected them to office just less than three years ago.  In an atmosphere of pomp, splendor and hopefulness, the leaders of the NRP pledged to continue to serve with humility, loyalty and distinction, much to the appreciation of the massive crowd on hand.