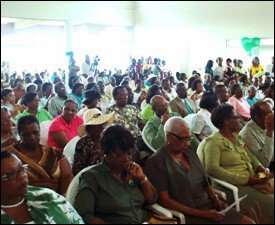 At the Occasions event hall, Premier of Nevis, the Hon. Joseph Parry recognized the iconic figures of the party, as he addressed supporters and delegates at the Nevis Reformation Party (NRP) Convention, Sunday.  He told a very attentive crowd, “These are the people who have passed on and who transformed passion into action!”

Mr. Parry stated that the handiwork of St.Thomas’ pre-school and St. John’s Primary are the achievements of Eustace Nisbett. “He was a true patriot of Nevis and a loyal soldier of the Nevis Reformation Party,” he said.

The Premier also made mention of the late Levi Morton, Entrepreneur, Politician and Minister of Government, whom he said was the Hercules of the Nevis Reformation Party.

As the Premier talked about the male and female warriors of the party, he mentioned Georgette Seabrookes, Elizabeth Pemberton, Tered Parris, Horace Liburd and Annie Mills.

“We salute and honour them for their great sacrifice of self and family on behalf of their country.”

Mr. Parry stated that the NRP was born at a period when the Nevisian psyche was at a historical low. “The year 1970 brought the biggest disaster in the history of Nevis”¦the Christena disaster. Every household on this island lost a soul in the Christena disaster. Hundreds fled Nevis as a result.  Even in the depth of despair sprung hope. The deliverer came forth in the form of the Nevis Reformation Party.”

He said that it was through the inspiration of leaders such as Mr. Simeon Daniel, Ivor Stevens, Uhral Swanston, Levi Morton, Arthur Evelyn and many others that the people of Nevis were able to rise through the depths of despair and into a brighter future.

With delight and excitement Premier Parry echoed, “Are we proud of our party? Do we boast about the achievements of the Nevis Reformation Party?  Tell it to your children.  Be proud of your history!”