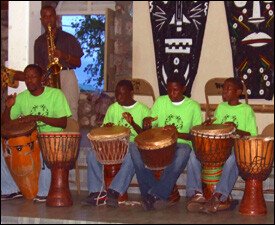 The Department of Culture lived up to the promise of “a night of drumming at its best” at Heart Beat 2009 on Thursday. This was determined by the performances of the primary school students as well as the ovation of the audience.

Permanent Secretary in the Ministry of Tourism, Sports and Culture Lloyd Lazar told SKNIS that many in attendance hailed the annual concert, held in the Old Boys School, a success. He noted some of the benefits from being a part of this programme.

“It encourages them to become involved and helps “¦ maintain our cultural heritage and of course there is the entertainment segment,” Mr. Lazar disclosed, explaining that visitors to St. Kitts and Nevis are eager to sample the unique island experience of which drumming is an important part.

“This has certainly been one of the most outstanding presentations we’ve seen,” he added, and gave credit to the Department of Culture’s Drumming Specialist Royd Phipps for tapping the potential of the students in the programme.

A new feature this year was poetic pieces being read about the history of the drum and its practical use as a communication tool, musical instrument and other functions.

Four time St. Kitts’ reigning Calypso Monarch King Konris also performed at the show much to the delight of spectators in the packed hall. He stated that the presentation “was really good” and he was excited to see the young people involved in productive and fun experiences.

King Konris, who’s real name is Konris Maynard, disclosed that music had a positive impact on him during his childhood and expressed confidence that it will have a similar effect on the young drummers.

“Playing a drum or any musical instrument takes a lot of time and practice,” he stated. “As long as you take that time to practice and perfect the art of playing that instrument then you won’t have time to do anything bad on the street.”

The dynamic calypsonian encouraged young people to remain positive, respect others and reach for the stars.