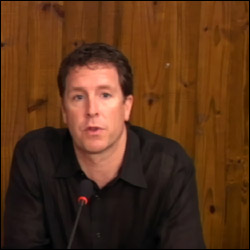 Three Washington based renewable energy experts participated in a recent press briefing with officials of the Nevis Island Administration (NIA) to update the Press on matters pertaining to geothermal legislation.  Policy and legal expert, in renewable energy resources, laws and commercial transactions at the United Nations Industrial Development Organization (UNIDO) Mr. John Armstrong said that he found it remarkable that the island of Nevis was able to develop its own resource.

The UNIDO expert stressed the importance of having the appropriate legislation and confirmed that the Ministry and the island’s electricity provider Nevis Electricity Company Ltd. (NEVLEC) had worked tirelessly to finalise the legal framework, which would govern geothermal energy on Nevis.  Mr. Armstrong revealed that through the joint efforts of the NIA and NEVLEC and with some assistance from the Organization of American States (OAS) a solid legal framework was in place, and was an indication that protection would be made not only for the electricity prices for tomorrow but the electricity prices and the availability of the resources for generations to come.

He further elaborated on the need for specific geothermal legislation, to be appropriate for most legal systems. Geothermal energy, he explained, was unique and was normally addressed separately from other renewable sources of energy. He also clarified that it was not quite as necessary to legislate the other renewables because they fell under pre-existing laws.  Mr. Armstrong lauded the NIA for its professionalism and unrelenting commitment to develop and finalise Nevis’ geothermal energy and its legislation.

“It’s been a great pleasure to work with the Nevis Island Administration for the past several months, with Minister Powell, with Patrice and with NEVLEC. The documents are a series of contracts, which permits licenses and concessions to be given to the various developers of both wind and geothermal power and power purchases agreement.  “Many people have never heard of a power purchase agreement but it is an extraordinarily important document particularly here in Nevis.  The laws, the regulatory, the permit and the framework coupled with the power purchase agreement are virtually a declaration of independence, independence from the dependence upon foreign oil,” Mr. Armstrong said.

The Washington contingent also comprised of Energy and Climate Change Division Chief at the OAS Mr. Mark Lambrides and OAS Energy Engineer Specialist Mr. Kevin De-Cuba. Mr. Lambrides specified further assistance, which the OAS would make available to the NIA.  “We will continue with this current process through completion of the law and the contracts. We will continue to see the wind power purchase agreements through to its conclusion. I can envision the OAS helping with the feasibility of the interconnection that might happen between two islands so that the benefit of geothermal may be shared throughout.  “We’re discussing right now the provision of technical assistance to help build the institutional and human capacity in the government to be able to manage this resource, manage the inflow of geothermal electricity as we anticipate, so providing assistance through the NIA, through the Federal Government and through the utilities so that the unique technical characteristics of this power could be considered,” he said.

The OAS Chief made reference to wind electricity and the geothermal project as the two major activities that were focused on during their four-day stint on Nevis. He said a proposal was on the table to develop several mega-watts of wind electricity, which would generate a great wind regime that would be utilised to produce power at a lower cost.
Mr. Lambrides further mentioned that the geothermal effort [by the NIA] was really a continuation of that began by the OAS, with support from the Global Environment Facility (GEF) in 2003, under a project called Geo-Caraibes. He further stated that under the project, the OAS undertook activities, which was the first phase of exploration.

He indicated that the exploration work was a lot of geology, geo-chemistry and geo physics and the scientific work conducted, allowed for the private sector development of the resource.

Lambrides further stated that their time spent together with the NIA, was effectively used to review a number of documents consistent with the future development of the geothermal opportunity currently pursued on the island.
“The Geothermal Resource Bill would set the legal and regulatory framework for the development of geothermal energy. We looked at the Power Purchase Agreement, which is the contract that effectively allows for the sale of electricity between the developer and the buyer, in this case, NEVLEC. We also looked at the contract that gives the developer the authority to develop and operate the facility,” he said.

Mr. Lambrides expressed appreciation to the Hon. Carlisle Powell, for the invitation to continue working with the NIA, on the exciting opportunities for Nevis, in the renewable energy arena.