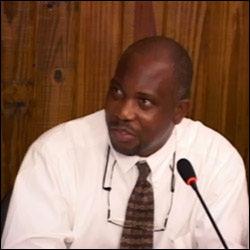 Junior Minister with responsibility for Communications, Works, Public Utilities, Physical Planning, Posts, Natural Resources and Environment in the Nevis Island Administration (NIA) Hon. Carlisle Powell, announced to the media that the draft for geothermal energy legislation was at a stage where the NIA was ready to receive comments from stakeholders and the public.

He said the draft will be taken to Parliament and later would become the Bill that would protect geothermal and other renewable resources of energy for the people of Nevis. Mr. Powell made the pronouncement during a recent press briefing recently held at the Nevis TV Channel 8, to inform the media about current developments that pertained to geothermal legislation.

Mr. Powell said evidence suggested that geothermal energy would have a significant impact on the economy of Nevis, which would generate millions of dollars per annum for the island’s Treasury. He further expressed that the advent of geothermal energy would provide funds for the NIA to develop Nevis at a rapid pace unlike before.

“Now why have we taken such care and why have we decided to move this forward even though we’ve taken care at pace? We have done so because in all of our discussions with the other persons and countries in the world who know of and produce geothermal power and indeed those persons and companies that produces wind power, that there is an abundance of evidence to suggest that in geothermal, in particular, we have a resource that will be able to, over time, have a significant impact on the economy in Nevis, which will in turn allow us to develop the country at a pace that we have never been able to do before so for that, we are extremely grateful, ” he said.

Mr. Powell informed the Press that very little was done between October 2004 and July 2006 and the current Administration had decided to move the project forward at a careful pace, which would best contribute to the sustainability of renewable energy for the island.

“We’re looking forward to the time when NEVLEC [Nevis Electricity Company Ltd.] as a company, will be able to see a turn around in their fortunes, will be able to have a stable supply of power and will be able to see the red line turn into a black line and become a company that is sustainable and that we will be here to look after the resources which will be entrusted to them and we’re speaking specifically of the wind and geothermal resources,” Mr. Powell said.

He further remarked that he was pleased when Permanent Secretary (PS) Mr. Ernie Stapleton had advised him that the Energy and Climate Change Division Chief at the OAS Mr. Mark Lambrides would accompany the Policy and Legal expert in renewable energy resources laws and commercial transactions, at the United Nations Industrial Development Organization (UNIDO) Mr. John Armstrong and Organisation of American States (OAS) Energy Engineer Specialist Mr. Kevin De Cuba on their second trip to Nevis, to contribute to the final draft.

Mr. Powell commended everyone who assisted with their time and expertise to advance the work, including Mr. John Armstrong, Mr. Mark Lambrides and Mr. Kevin De Cuba.

Also recognised by Mr. Powell for their invaluable contribution were the staff at the Ministry of Finance headed by PS Mr. Laurie Lawrence and all other persons contracted, who provided their expertise which enabled the draft to be in its review stage.