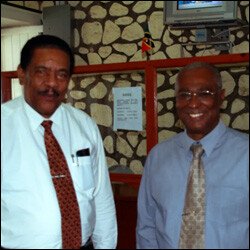 Minister of Energy in the Commonwealth of Dominica, Hon. Charles Savarin and Dominica’s Chief Technical officer in the Ministry of Energy, Mr. Lucien Blackmore, paid a courtesy call to the Premier of Nevis, Hon. Joseph Parry, on Thursday morning at the Premier’s office at Bath Hotel. The main agenda for the gentlemen’s visit was to observe the geothermal energy project presently taking place on Nevis.

The Premier welcomed both men and informed them that he is pleased to meet with them to discuss the way forward for the development of geothermal in the sub-region, as Dominica, St Lucia and Nevis have all been identified by the Organization of American States (OAS) as the leading Caribbean islands with geothermal potential.

“I am very delighted that you have come to Nevis to visit our geothermal sites and as Dominica  and Nevis proceeds with geothermal development, I hope that we will both be satisfied and able to export energy to neighboring islands,” remarked the Hon Joseph Parry.

Like Nevis, the Dominica Government has issued a license to West Indies Power Ltd. (WIP) to carry out exploration work. Mr. Savarin said that since the island of Dominica has the potential for clean energy, they wanted to meet with their counterparts from sister islands with similar potential. He said the government of Dominica would like to get the development of geothermal right the first time, so, as he said, “it is important for us to observe what other islands are doing to pursue the right course of action.”

After making a visit to Geothermal Site 3, the Dominica Government officials spoke with Minister of natural resources and the environment, the Hon. Carlisle Powell, as well as Senior officials with West Indies Power.

Meanwhile, later that day, Mr. Parry and media officials met for a press conference where the Premier discussed the meeting at the Fifth Summit of the Americas which took place in Trinidad and Tobago April 17-19, 2009.

Mr. Parry discussed the issue brought up by Dominica’s Prime Minister the Hon. Roosevelt Skerrit who put forth a strong point for geothermal development in Caribbean islands which have the energy potential.

According to Premier Parry, Mr. Skerrit discussed the business of Dominica, Nevis and St. Lucia, having an achievable energy development which needs to be assisted by the powers that would be willing to provide funds for the exploratory part of phase one, where very few persons are keen to invest. Mr. Skerrit also stated, that it could be established that with assistance in the early stages, these developing geothermal nations could be put on the verge of sustainability.

Nevis is presently past the exploration phase and the island is now ready to move to the next stage forward.

“I am under the impression that funding will be made available to develop this energy source and the funding will be on the fast track.  In terms of the political and financial backing and support that is needed, I feel very positive as far as Nevis is concerned,” said Mr. Parry.