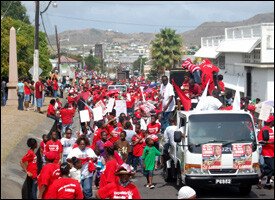 Thousands of workers and their families joined the leaders of the Labour Movement in St.Kitts on Monday to celebrate Labour Day, commemorated here on the first Monday in May.

St. Kitts and Nevis Prime Minister and Political Leader of the governing St.Kitts-Nevis Labour Party and President of the St. Kitts-Nevis Trades and Labour Union, Mr. Clifford Thomas joined Cabinet Ministers, Executive officers of the Trade Union, workers and supporters of the Labour Party in the march which began at the Patsy Allers Playing Field in West Basseterre, through the streets of Central Basseterre and East Basseterre before returning to the starting point.

While thousands marched, hundreds wearing the traditional red colours lined the streets or watched from their homes as the massive procession passed by.

A large banner with the message “Labour ““ Careful Hands in Serious Times” led the procession followed by dozens of pom-pom girls.

Others wore T-Shirts, carried banners or placards in support of their respective parliamentary representative or candidate for the next general election.

Some placards and banners read: “The Country Needs Labour at this Time,” “Constituency 8 stronger than ever,” “Labour supports farmers with 4,500 acres of land,” “Cedric Liburd ““ Safer hands, Clearer Vision” “I support Dr. Norgen Wilson ““ Fired Up and Ready.”

There was a float promoting agriculture and a group of children highlighted several professions they can pursue by taking advantage of the educational opportunities.

Independent observers have described the march as the biggest since 2004 with estimates of nearly 10,000 marchers and those lining the streets or their homes in the traditional red color.

The laying of wreaths at the grave side of fallen Labour stalwarts preceded the march and the traditional address by the Prime Minister and Political Leader of the Labour Party concluded the official activities.

As Prime Minister Douglas concluded his address the heavens opened up and rained poured for 20 minutes but that did not stop the party afterwards. He used the opportunity to meet and greet hundreds of persons from all walks of life and participated in the picnic that followed.