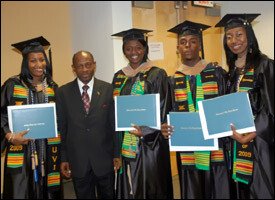 Loans totalling five million dollars have been approved for nearly 80 students by the Development Bank of St. Kitts and Nevis Development to study at colleges and universities overseas for the first six months of this year.

This has been disclosed by St. Kitts and Nevis Prime Minister Hon. Dr. Denzil L. Douglas, who reiterated the commitment of his St. Kitts-Nevis Labour Administration to ensure that students get financing to attend college or university.

Prime Minister Douglas said figures provided by the Development Bank of St. Kitts and Nevis indicate that 78 student loans totalling EC$4,892,310 were approved during the first six months of this year.

Dr. Douglas said his government is determined that each student who wants to go off to a college or university must have be able to attend the institution of their choice.

“My government believes in using the resources of the country to empower our people to raise themselves out of poverty by getting the necessary education and preparing themselves to build this society into a first-class country,” said Prime Minister Douglas.

Between July 1995 when the St. Kitts-Nevis Labour Party took office to December 2008, the Development Bank of St. Kitts and Nevis, has financed loans totalling EC$84 million to 1,767 students to study at colleges and universities, compared to 171 students who received loans totalling EC$900,000 during the 15 year tenure of the former People’s Action Movement (PAM) administration of the Prime Minister the Right Hon. Sir Kennedy Simmonds.

“The days of approving loans only as a result of political affiliation as happened under the previous PAM Administration came to an end when I assumed the office as Prime Minister in 1995. No students whose family was Labour were approved for loans under PAM. I see all students as Kittitians and Nevisians. The days of asking students who their parents are and of their political affiliations during the PAM era have come to an end,” said Dr. Douglas, who reiterated that it is the duty of his Labour Administration to adequately prepare the young people to take up leadership roles in the public and private sectors.

“Our vision and policy is that every family must have members who have completed degrees by going off to college or university. Young people want to better themselves. They must not be stopped because their families support a particular party. That is wrong,” said Prime Minister Douglas, who pointed out that a return of a PAM government will re-introduce discrimination.