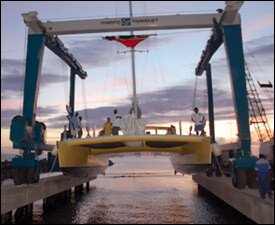 Less than two months after its official opening, the St. Kitts Marine Works Ltd. (SKMW) is regarded as one of three Caribbean yards than can accommodate larger and larger vessels for storage and repairs.

The new facility in St. Kitts boasts a 165-ton Travelift. This makes SKMW ““ along with Puerto Del Rey Marina in Puerto Rico with its 165-ton lift, and Peake Yacht Services in Trinidad with its 150-ton lift ““ the Big Three yards in the islands for yachts over 100 feet.

“The maximum length of vessel we can handle for now is 120 feet with a width of 35-feet. Draft at the ramp is 14 feet. An 85-ton grove truck crane is onsite with 180-foot of boom to lift masts. SKMW’s storage area is 12 acres and we are hoping to expand to 26 acres in about two years,”  Regiwell Francis, the Kittitian owner of SKMW is quoted in the Triton ““ the Mega-Yacht News.

Pressure washing, steam cleaning, sandblasting and welding are among the services offered. Machinists and mechanics are on call. High speed Internet, closed-circuit TV linked on the Web, electricity, water and 24-hour manned security are also available.

“St. Kitts has very few bays and protected harbors, and while there is a small marina that was built when the town’s main port was expanded to accommodate cruise ship docking, it is more of a day docking operational marina rather than a storage facility for the long term,” said Patrick Ryan, co-founder of Fortress Marine, which rents space from SKMW.

“St. Kitts has not been a suitable place to leave boats during the hurricane season. Prior to the opening of SKMW, larger vessels would look for shelter in neighboring islands, mainly St. Maarten, said Ryan in the article written by freelance writer from St. Thomas, Carol Bareuther.

Proximity is what led Capt. Tessan Danet, head captain at The Four Seasons Resort on Nevis, to SKMW.

“We brought the property’s 51-foot power yacht in for its annual marine survey and haul because this is much closer for us than St. Maarten,” he said.