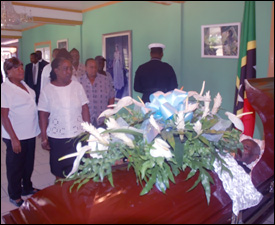 Scores of residents have been filing past the open casket of St. Kitts and Nevis’ First Governor General, the late Sir Clement Athelston Arrindell, GCMG, GCVO, QC. and signing the Book of Condolence ahead of Thursday afternoon’s State Funeral Service.

The Body in an open wooden casket has been Lying in State since 10:00 this morning at Government House, Sir Clement’s home for several years when he was Governor and later Governor General of the Federation of St. Kitts and Nevis.

Sir Clement, who died at the age of 79 on March 25th 2011, and will be buried with full military honours following a State Funeral Service at the Wesley Methodist Church at 3:00 P.M.

The State Service will be led by Methodist Minister, Rev. Dr. Wycherley Gumbs, who will also read the Gospel and deliver the Sermon.

According to the Order of Service, a tribute will be given by Dr. the Right Hon. Sir Kennedy A. Simmonds, First Prime Minister of St. Kitts and Nevis. The Eulogy will be delivered by St. Kitts-born Dr. Joseph S. Archibald, distinguished legal luminary resident in the British Virgin Islands; the Scripture Reading by Deputy Prime Minister Hon. Sam Condor and the Epistle by Prime Minister, Hon. Dr. Denzil L. Douglas.

The Wesley Senior Choir will render an appropriate selection.