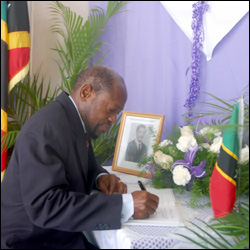 As final preparations continued for Thursday’s State Funeral of the Federation’s First Governor General His Excellency Sir Clement Athelston Arrindell, GCMG, GVCO, Q.C., flags are being flown at half-staff and high ranking government officials and diplomats have been among those signing the Book of Condolence at Government Headquarters.

“God gave to this Federation of St. Kitts and Nevis, a Governor- General who, to the very highest possibility, and to the very uttermost, always tried to act in a manner worthy of his high calling.   He was indeed God’s creation of dignity and of ability.  As a comment I must say quite simply that, as they did for Saint Peter the gates will always open of their own accord if one is in the company of God’s angels.”

Governor-General who signed the Book of Condolence at Government House, said the beautiful unfolding of Sir Clement’s life ““ his process of growth and his coming into his own empowerment is of no surprise to him.

“In his early youth, I maintained daily and close contact with him, for I was his teacher even before his Grammar school days.  I therefore had the opportunity and privilege to observe the brilliant potential which the future has not failed to honour,” said Sir Cuthbert.

The casket of Sir Clement will lie in State at Government House at Springfield on Thursday from 10:00 A.M. to 2:00 P.M. followed by the State Funeral Service at 3:00 P.M. at the Wesley Methodist Church. Interment is at the Springfield Cemetery.

ZIZ Radio and Television will carry a live broadcast of the State Funeral Service.

Meanwhile, public servants wishing to attend the State Funeral will be allowed to leave work at 1:00 P.M. on Thursday.