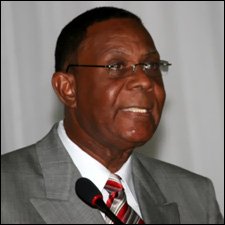 Lead Counsel for Commissioner Thomas Sharpe QC, the Commission of Inquiry (COI) and the Nevis Island Administration (NIA) Sir Richard Cheltenham, described the first day of High Court proceedings, in matters filled by Former Premier of Nevis Hon. Vance Amory against the respondents as an interesting one.

“Today was an interesting day and it is the sort of day that you have to be like a fisherman almost [which] you come across from time to time in court. Quite unexpectedly issues arose today and we had, on our feet, to respond.

Mr. Cheltenham spoke to the Department of Information at the end of the proceedings late Thursday and noted that the Court disposed of a series of procedural matters.

The first procedural issue he explained, dealt with the limitations that were placed on the cross examination of Commissioner Sharpe who was in London and was subsequently cross examined via an audio video link.

“The normal rule is that, in very limited circumstances in judicial review proceedings, can a deponent ““ thhe person who has sworn affidavit – is being cross examined. In the interest of justice, it can be allowed.

Sir Cheltenham further explained that just before the Court adjourned for lunch at 1:45pm, there was another application made to strike out parts of an affidavit that was filed by Legal Advisor to the NIA Mr. Patrice Nisbett on behalf of the Administration. However, the application was rejected by the Court.

When the Court resumed sitting at 3:15pm another procedural matter came was presented when Counsel on behalf of Mr. Amory, sought to get Sergeant Stephen Hector to give evidence against the Commission.

Sir Cheltenham explained that the Senior Police Officer had been a member of the investigating team for the COI until the end of July 2009. He had written a letter of complaint about his experience as part of the team which was before the Court as an exhibit in Affidavit filed by Mr. Amory on Wednesday, one day before the hearing.

The Lead Counsel also said that the Claimant had obtained an order without notice to his side of the court yesterday which summoned Officer Hector as a witness to give evidence on Thursday.

According to Sir Cheltenham, objection was made and the Court ruled that Mr. Amory’s Counsel had to file the nature of the questions which they wished to pose to Sergeant Hector and serve it to the Respondent’s lawyers by Friday morning.

Notwithstanding, Sir Cheltenham said he was hopeful that the proceedings would conclude sometime on Friday afternoon and would rest with Resident Judge Ianthea Leigertwood-Octave for deliberation,  once the substantive matters were dealt with.

One of Mr. Amory’s two claims before the High Court said that the establishment of the Commission was contrary to law (Commissions of Inquiry Act) and also contrary to the constitution.

The second charge, Sir Cheltenham explained, which related to bias was in two parts.

“He [Amory] is claiming that Commissioner Sharpe was infected with bias and that largely results from his relationship with Mr. [James] Gaskell, who is a public commentator and said to have been critical of Mr. Vance during his tour of duty as Premier.

“The second part of the bias complaint is that Lead Counsel for the Commission apart that all the other parties Ã¢â‚¬” the secretary, the typist and the junior counsel are all themselves larking in impartiality and may very well be infected with bias as well. So they are the two broad issues of substance that we need to talk about and give submissions on tomorrow, he said.