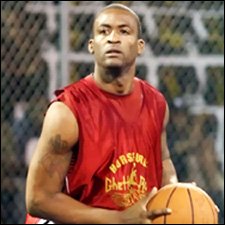 The talented newtown based Ghetto Roots continued their dominance over the multi-time champions Hitters as they defeated them for the 2nd straight finals game to register a clean sweep.

Hitters raised their intensity in the 4th quarters and played a much more frantic man to man defense which rattled the Ghetto Roots offense and as a result the Roots committed some crucial fouls and turnovers. By the midway point of the 4th quarter Hitters had cut into the lead and was now down just 10 points.

Some controversial calls resulted in Hitters being able to further dig into the Ghetto Roots lead and at one point was able to get as close as 3 points . However Rymal”Bally” Browne showed his leadership and talent as he took over the final 2 minutes for Ghetto Roots. Demanding the ball on every possession Bally meticulously wore down and carved up the Hitters defense to score almost at will . Behind his almost perfect night at the free throw line Ghetto Roots opened things up when Carlos Monzac made an exciting play which brought the crowd to their feet . Bally followed up with a steady drive to the hoop which resulted in a foul and him being sent to the free throw line.

By the end of the game Ghetto Roots had a very impressive and dominating 96-89 victory. Ghetto Roots had good all around play from their dynamic duo of Levi “The Black Mamba” Fyfeild and Rymal” Bally” Browne in addition to Carlos Monzac, Vincent Hicks, Quincy “Puppet” Taylor and the big man William Natta. Natta plays for Bellevue University, Omaha Nebraska in the US.

Rymal “Bally” Browne was named SKABA Playoff Finals MVP as he averaged 25 plus points . Levi ‘the Black Mamba” Fyfeild was no doubt a close contender for the MVP as well. But although “By-By” is without a doubt the most exciting and arguably the best player in SKABA , Rymal ‘Bally” Browne silenced all his critics and has now etched himself not only as SKABA Playoff MVP 2009/10  but also as  one of the two top guards in SKABA along with the Black Mamba Levi Fyfeild.

‘It feels good to be finally win this championship and silence all my critics, said MVP Rymal “Bally” Browne. “I always knew we had the ability to win the SKABA title and after our loss last year in the finals I vowed not to have a repeat and I am sure all the players felt the same way. Hitters played well but I think my teammates and I wanted this championship much more,” Browne continued.

Both Bally and the Black Mamba are expected to travel to the US as members of a SKABA Basketball Camp all star team that has been invited to the US to engage college teams their with a view of landing and pursuing  scholarship opportunities. Ghetto Roots was the first ever OECS Club Champions and multi-time SKABA champs. This is their first championship under the new Premier Division format which was instituted in 2000.