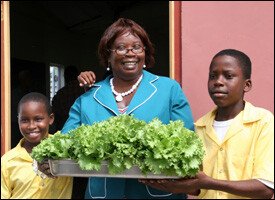 Head Teacher at the St. Thomas Primary School Ms. Earlene Maynard has applauded those responsible for the implementation of a successful new school feeding plan. The programme commenced at the school in 2008 and in February 2009 at the St. Johns Primary School.

The School Feeding Programme which encapsulates proper nutrition for children and improved food security also taps into the Department of Agriculture’s ongoing drive to eat local.

“Generally the children are eating better. Before, a lot hated vegetables, we have always tried to balance meals before but after we became partners with Mr. Gaskell and Mark at the Double Deuce; we did more awareness sessions about the importance of eating vegetables and fruits and I am really very pleased to say they are eating much better.

As a result of the new programme, the Principal said her students had developed better eating habits; many would just leave scraps and veggies were consumed. They also enjoyed eating fruits.

We have also tried to emphasise eating local and have tried to ensure that whatever they are fed is grown locally and we buy fish from local fishers,” she said.

Ms. Maynard also praised her staff for their efforts to ensure that the children were fed in a timely manner during the lunch break.

Meantime, Permanent Secretary in the Ministry of Agriculture and former educator at the Charlestown Secondary School Dr. Kelvin Daly told the Department of Information on Tuesday, that he didn’t think persons realised the depth at which children were undernourished on Nevis, which had in recent years led to a decline in healthy youngsters.

He said one did not have to be a scientist to realise the link between proper nutrition and health and learning.

“We were looking at the high incidence of diabetes in the population, hypertension and the continual debilitation of these diseases, the high rate of asthma, kids coming to school who were overweight because of poor nutrition. So this diet was designed to incorporate a lot of complex carbohydrates, a lot of fruit, traditional vegetables that would try to ameliorate a lot of diseases associated with poor nutrition”¦

“You are getting children in school who are Type 2 diabetics who are generally unfit because they spend so much time eating junk and not exercising. The whole meals programme came out of a dire need to do something. I don’t think people have to be scientists to realise the importance and the link between proper nutrition and health and learning,” he said.

Dr. Daly explained that the meals were designed by chiefs in private industry who sought to make vegetables that children refused to eat more appealing, so there was much creativity involved to get them to consume vegetables.

“The tastiness of the meal had to go hand in hand with the nutrition and has worked marvellously well and the children have taken to it; the parents love [the programme] and when you compare that to what happened before when you had children getting peanut butter sandwiches and hotdog sandwiches but the real nutrition was not coming through, it’s not just a belly full.

He also pointed to two key persons who he said had contributed tangibly and otherwise to the programme.

“In support of this, the benevolence of key people in the society like Mr. James Gaskell and Mr.  Hastings Daniel who has given so much of his time and effort to get the programme off the ground. They have basically financed without government input all the equipment in those two schools – St. Thomas started last year and just last month we started St. Johns.

“All the kitchens were outfitted with heavy duty freezers, coolers, stoves, all the cutlery, cookware and all the tableware. It did not cost the government one cent in terms of equipment. What the government is providing is the kitchen staff to prepare the meals. The parents are contributing $4 per meal per day, so that is $20 per week. It is strictly voluntary in terms of the kids who are in the programme,” he said.

Dr. Daily explained that the feeding programme went beyond the Department of Agriculture since most of the supplies that they provided to the schools came from farmers through the Department’s Marketing Unit.