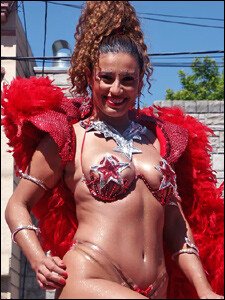 The Competition Will Be Tough This Year

The calypso semi-final bacchanal took place on 19 December 2009 at the Carnival Village battlefield. The battle was loaded with drama and, as has become the norm, the results sparked heated discussions. Controversy reigned supreme again. Notwithstanding the controversy, the music and sounds of sixteen (16) of the Federation’s best calypsonians for 2009-2010, resulted in one the best semi-finals shows in recent history.

The night started with King Dwighty performing the National Anthem.  The MCs were Sandra B and Monarch. The Mighty Take Over was first up, followed by Quantash, Singing Kibbie and the Lord Kut, who performed his hard-hitting kaiso, “Hermia”.  These were followed by Baker and Astro, one of Nevis’ top calypsonians and a crowd favorite.  Hollywood rounded out the top half of the show with an excellent composition saluting a host of former national calypsonians.

Nevis Culturama icon King Dis N’ Dat started the second half of the competition, begging for a bail-out for the poor man, followed by former finalists King Dwighty and Godfrey, who were followed by the young first time semifinalist Mighty J.  Mighty J has signaled that there is a bright future for calypso in St Kitts and Nevis.  The final quarter of the show included veteran calypsonians I-Sour Sop, Singing Angie, Big Lice and King Socrates, who performed his popular “The Real Health Scare”.

It was indeed a battle only for generals with the aptitude necessary to maneuver their lyrical and musical weaponry on this Calypso Battlefield.  The following eight (8) Calypsonians survived the semi finals battle:

Based on this line-up, the probability of history being made at the grand battle, the St. Kitts & Nevis National Carnival Monarch Competition, is higher than any other time since the inaugural National Carnival Calypso Competition in 1971.  With only one former calypso king amongst the finalists, there is an 87.5 % chance of a first-time monarch being crowned.  There is also a 37.5 % probability of a Nevisian capturing the title for the first time, with Nevis having three representatives in the finals. The likelihood of a first time female monarch also heightens the anticipation surrounding the ultimate calypso battle.

So there you have it.  The battlefield is now set.  Eight (8) Generals will test their tactical wit on finals night, to see who will become top general in this year’s St Kitts & Nevis National Monarch Competition on December 29th, 8PM at Carnival Village.