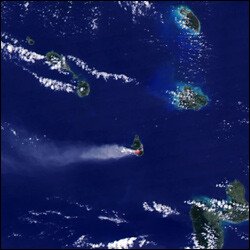 Passengers to St. Kitts’ Robert L. Bradshaw International Airport were informed Sunday afternoon, that the falling ash from the volcano in Montserrat had resulted in the cancellation of their flight to St. Kitts.

The Communications Unit in the Office of the Prime Minster (CUOPM) has been informed of ongoing ash emissions from the SoufriÃ¨re Hills Volcano in Montserrat.

“The Southeasterly wind flow at lower levels of the atmosphere may cause the volcanic ash to move over the islands. Volcanic ash has been already reported today to cause a drop in visibility, the density of the ash cloud will be of light to moderate,” a well informed source said.

Passengers at the Robert L. Bradshaw International Airport were also informed of the cancellations. “”All American Airline flights have been cancelled,” said an airline employee who answered the phone. American Eagle flight from San Juan was also cancelled.

Residents in St. Kitts and Nevis were also affected by the ash fall, hampering chores to get things in shape for the celebration of Christmas and Carnival.

In the United States, a major storm clawed its way up the East Coast on Sunday, crippling travel.

Around New York City, the brunt of the storm hit Long Island, with whiteout conditions. Nearly 25 inches was recorded in Upton by Sunday. Nearly 11 inches of snow fell on New York City by Sunday morning, and the storm could be the worst the city has seen since about 26 inches fell on Central Park in February 2006, National Weather Service meteorologist Patrick Maloit said.

Airports in the Northeast that were jammed up in the storm Saturday were working their way back to normal operations. About 800 flights at the New York City area’s three major airports remained canceled despite clear conditions on the runways.