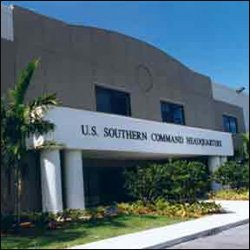 The workshop from February 22 to 26 will be hosted by the USMLO Commander, Edward J. Gaynor and centers on regional cooperation between the United States Southern Command and its Eastern Caribbean partnering nations (PN) uniformed forces.

“The EC participants will receive a presentation on various U.S. military programs including: US Military assistance for providing equipment and uniforms, military training courses conduced in the US and in the EC countries by US Military training teams, security conferences and workshops hosted by the US Military in the US and in various EC countries, and partnering between the EC countries and the state of Florida for training with the US National Guard,” said a press release from the United States Embassy Public Affairs Office said on Friday.

The annual workshop is uniquely structured to promote Security Assistance and Regional Security within St. Kitts and Nevis and the other Eastern Caribbean nations and will take place after the presentations.

The EC participants will meet one-on-one with U.S. military program managers to develop, plan, synchronize, and coordinate various goals and executable activities for their countries over the course of the next two years.   All are designed to increase cooperation and enhance the security of the EC region.

Scheduled attendees from the Eastern Caribbean region are the Deputy Chiefs of Defense of St. Kitts and Nevis, Antigua and Barbuda and Barbados; the Deputy Commissioners of Police of Antigua and Barbuda, Grenada, St. Kitts and Nevis and St. Lucia; the Superintendents of Police for Barbados, Dominica and St. Vincent and Grenadines, as well as their training and operations officers.

The United States Southern Command (SOUTHCOM), located in Miami, Florida, is one of ten unified Combatant Commands (COCOMs) in the Department of Defense. It is responsible for providing contingency planning, operations, and security cooperation for Central and South America, the Caribbean (except U.S. commonwealths, territories, and possessions), Cuba; as well as for the force protection of U.S. military resources at these locations. SOUTHCOM is also responsible for ensuring the defense of the Panama Canal and canal area.

Under the leadership of a four-star commander, SOUTHCOM staff is organized into directorates, component commands and military groups that represent SOUTHCOM in the region of Central America, South America & the Caribbean.