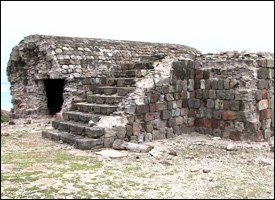 An urgent call was issued to members of the Nevis public on Thursday, to desist from the removal of stones from the island’s historical sites. Tourism officials on Nevis brought attention to the acts of vandalism which have left some structures around the island at risk of toppling over.

Assistant Secretary in the Ministry of Tourism Mr. Carl Williams told the Department of Information during a site visit to adjoining estates of New River and Coconut Walk, that the practice of removing stones from these national structures was illegal.

He warned that persons could face fines and imprisonment at the island’s courts if they were convicted for that crime under the National Environmental Conservation Protection Act.

Mr. Williams said the indiscriminate practice was of real concern to the Ministry of Tourism.

Mr. Williams also urged persons who witnessed anyone engaged in the removal of stones from any historical sites to report the matter to the nearest police station or to the ministry of Tourism at Bath Hotel.

Meantime, Mr. Moses Hendrickson who said he grew up and subsequently worked at Fothergills added his displeasure to the ongoing removal of stones from that site.

“I heard a few days ago that they are picking up the stones from here. I regret to hear that and this action should stop and whosoever get caught should pay the penalty,” he said.