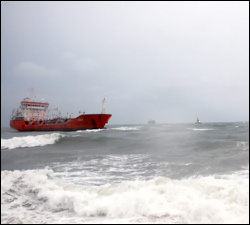 Port officials are hoping that sea conditions will improve to allow the container vessel Tropical Tide to dock and discharge its cargo.

The Tropical Tide, which arrived from Tortola on Sunday has been anchored out to sea riding out the heavy seas from the sub-tropical depression which soaked St. Kitts and Nevis, the rest of the leeward Islands and other Eastern Caribbean islands.  The storm has caused flooding and extensive damage to roads, bridges and homes.

Marine officials in St. Kitts are also to inspect the Turkish-flagged Azra-S, which ran aground in the Basseterre harbour on Monday with 18,000 barrels of diesel.

Once the white-capped waves are quieter, a tugboat from the nearby Dutch island of St. Eustatius will begin efforts to dislodge the 344-foot (105-meter) tanker.

A local cargo vessel, the Imani, which has been riding out the storm, broke its mooring about 2:00 pm Wednesday. The crew on board was successful however in preventing it from dragging its anchor by tying it to a buoy.