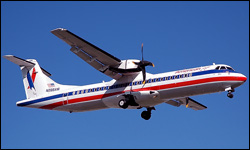 Passengers from an American Eagle flight forced to make an emergency landing at the Robert L. Bradshaw International Airport on its way from San Juan to Port of Spain, Trinidad were flown out on Tuesday.

Informed sources told the Communications Unit in the Office of the Prime Minister (CUOPM), that the emergency landing was made after a suspected lighting strike. There were no injuries to the near 20 passengers onboard.

The 20 passengers were flown out to Trinidad’s Piarco International Airport on Tuesday afternoon after another American Eagle flight arrived from San Juan, Puerto Rico.

The ATR72 was inspected on Wednesday and flown to Puerto Rico for further inspection.