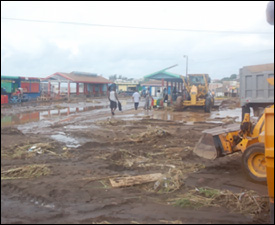 Heavy equipment operators were out in force in St. Kitts and Nevis removing debris and silt from public roads and other places after a sub-tropical depression, later named Otto, dumped heavy rains over the past three days.

The Ferry and Bus Terminal, cleaned Wednesday were filled with debris and silt from Wednesday night and Thursday morning’s deluge.

There were no deaths or injuries reported.

In Nevis, VON Radio reported roadways suffering the brunt of the water overflowing the ghauts on its way to the sea include Stoney Grove, around Pump Road; Marion Heights; Prospect; Browne’s Pasture; the area around Fountain Ghaut and in the vicinity of Nisbett’s Plantation Hotel.

Government and Disaster Preparedness officials are assessing the damage which they say could prove to be very costly.

The British Virgin Islands has been declared a state of emergency by Governor William Boyd McCleary on Wednesday following severe flooding that gripped the Territory, while the Department of Disaster Management (DDM) said it is the worst flood that has ever hit the Territory.

“…Decided to proclaim a state of emergency in the Territory. I will also be making an Order declaring three areas as disaster areas – Capoons Bay, Pockwood Pond and Prospect Reef, to enable Public Works to go into these areas and carry out any necessary works,” the Governor announced on Wednesday afternoon during a press conference held at the Department of Disaster Management (DDM).

However, the Governor said at this time there is no need for external help and no need for residents to get anxious.

The decisions were made following a meeting held by the National Emergency Operations Centre which was chaired by the Governor. They discussed the conditions within the Territory and plans for the response activities that are required.

The Governor said from speaking to persons in and around Territory, he was told that this is the worst flooding that has hit the BVI.

Sharleen Dabreo, Director of DDM concurred and said that it is the worst, even when compared to the 2003 floods.

Governor McCleary said the damage caused by this flooding has bypassed that of Earl. Four shelters are now open and persons are encouraged to utilise the shelters.

In St. LUCIA, the fishing village of Dennery on the island’s East Coast has been declared a disaster zone.

This follows heavy overnight rains that left an estimated 100 houses under water.

No injuries were reported.