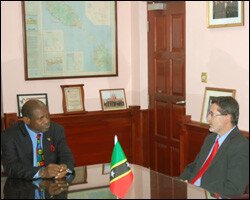 St. Kitts and Nevis and Austria pledged Tuesday to strengthen the existing good relations between both countries.

“As a small nation, we are establishing a cadre of professional persons in international relations and diplomacy. We will need your assistance in our continuing efforts to build the capacity and training in our human resources in our law enforcement agencies and Foreign Affairs Ministry. Austria has been helpful and I express through you, our gratitude to Austria for training our people in the areas of national security and international relations,” Prime Minister Douglas told Ambassador Schuller-Gotzburg, who was accompanied by Austria’s Honorary Consul, Mr. Reginald Amory.

Two police officers have been trained in forensics and personnel in the Ministry of Foreign Affairs have undergone training in Diplomacy and International Relations. Ms. Nerys Chiverton recently completed a Master’s degree at an Austrian University.

The Austrian diplomat said his country is also offering training in Hospitality/Tourism Management and grants had been offered earlier this year to university students.

He said his Government was enthused to provide assistance for a social project in the form of a three-year secondment of an Austrian officer to work as a project manager in St. Paul’s developing agriculture and the youth.

On Tuesday the Caracas-based Austrian diplomat presented his credentials to St. Kitts and Nevis Governor General, His Excellency Dr. Sir Cuthbert Sebastian. On Monday he toured the project in St. Paul’s.