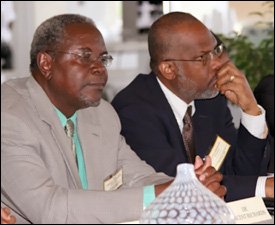 Antiguan Economist Dr. Vincent Richards applauded Premier of Nevis Hon. Joseph Parry and his Administration for the decision to consult on the economy. He said the exercise fulfilled the matter of transparency, one of the key ingredients necessary for good governance.

Dr. Richards was the featured speaker at Nevis Island Administration’s 3rd Annual Consultation on the Economy, hosted by the Ministry of Finance on Tuesday.

“I would like to commend Premier Parry and his Administration because this type of exercise fulfils the matter of transparency, bringing the business of the government to the people because”¦the government is the people and I suppose the peeople is the government,” he said.

The Antiguan Economist said, save for real national security issues and individual confidentiality concerns, government processes should be open and information about the affairs of state should be widely available to citizens in multiple formats at minimal or no cost.

Dr. Richards listed other markers that were essential to good public governance and cited that it was now globally accepted that governments and their entities should promote and reflect transparency, accountability, equity and fairness in their activities and good governance had to be the order of the day for all.

“Second must be citizen accountability but government should put in place mechanisms to determine the public services the citizenry wants to be delivered and be responsive to the changing needs of the citizens,” he said.

Citizenship accountability Dr. Richards explained was that the wishes of the people could change during the five year period of political office and good public governance demanded that the government responded to the changing times. Therefore the manifesto should not be used as a marker.

He contended that unlike in past years, it had become necessary for governments in the Caribbean to put mechanisms in place which allowed them to have a sense of what the mood of the nation was?, what were the burning issues that concerned the citizenry? and how the citizenry wanted those matters to be addressed?

With regard to public integrity, Dr. Richards said public officials should be held accountable for any abuses of public office for private gains.

“Mechanisms should be devised through which elected leaders can be held accountable to the electorate outside of the periodic election. Examples of such mechanisms would include integrity commissions, human rights commissions and other such entities,” he said.

Another issue which he noted was important to public governance was the matter of equity and fairness. Government services especially those of a basic nature, Dr. Richards said should be widely available to the broad mass of the society and should be delivered in a non discriminatory fashion.

“We all know that we can’t do everything at the same time but one way of addressing that matter is really to take the imperative of transparency to a high level and that could also mean taking the budgetary process to a multi-year level”.

“The matter of equity and fairness is very important and it is vital for good governance” he said.

The use of efficient methods should minimise waste, graft and corruption so that the tax payer’s dollars get the biggest band of the pie.