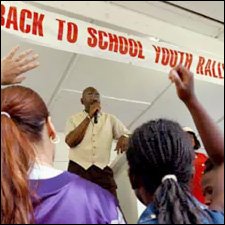 This year’s event will commence at 6:00p.m at the Netball Complex in Charlestown.  In the past, the event was held on the Sunday afternoon before the opening of school but was changed this year in the hope of boosting attendance.

At this year’s rally, students will be afforded an opportunity to display their multifaceted talents through song, choreography, drama and other activities.  An adult mass choir will also perform several selections.  The Minister of Education, the Honorable Joseph Parry will be in attendance to address the students.

The rally has a potent theme this year “Dare to Change”¦It’s Possible,” It is hoped that this theme will challenge the island’s youths to take a united stance against mediocrity, crime, gangs, violence and all forms of anti-social behavior.

This is in keeping with the objectives of the new Principal Education Officer, Mrs. Lornette Queeley Connor, who has set out to improve the levels of discipline and respect among Nevisian students.

The churches on Nevis have also combined to present a scholarship which will be given to one high school student and one primary school on a rotating basis.  The selection will be done by the Back to School Rally Committee in consultation with the Ministry of Education.  In addition, there will also be various prizes and giveaways during the rally.