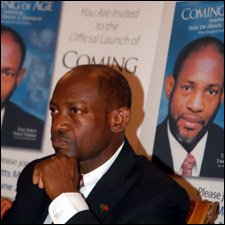 The Caribbean’s most senior civil servant says that the publication of “Coming of Age,” is a celebration of visionary leadership of St. Kitts and Nevis Prime Minister Hon. Dr. Denzil L. Douglas and the enormous strides made by the twin-island Federation.

“This collection of speeches, some 76 of the 800 he reportedly made in the 10 years, is in essence a chronicle of the political, social and economic history of St. Kitts and Nevis between 1995 and 2004. It provides glimpses of the major platforms that were launched by the government headed by Prime Minister Douglas during this period and identify benchmarks by which to measure the success of the various policies,” said His Excellency Dr. Edwin Carrington, Secretary of the Caribbean Community.

Speaking at the book launch at the St. Kitts Marriott Resort and Royal Beach Casino, Dr. Carrington said that the collection of speeches allow the reader to understand the challenges confronting St. Kitts and Nevis and the ambitious programmes advanced by the Denzil Douglas Government to cope with these challenges in the first two terms.

“This book is essentially history with a difference. The chronicle takes the form of a thematic rendition of the thoughts and actions articulated by a dynamic leader ranging from National Security; Housing and Land; the Economy; Health Care and HIV Aids; Education, Tourism, Media and Communications; the Relations between St.Kitts and Nevis; St.Kitts within the ambit of Small Island States; St.Kitts’ role in the Regional Integration Process and the International Arena.

“No where in Dr. Douglas’ vision for the country, better outlined in this volume than in his First Official Speech to the Nation as Prime Minister on August 2nd 1995 on the theme “˜Rebuilding a Nation of Beauty, Peace and Love.’ This romantic sounding theme no doubt reflects the deep passion and commitment of Dr. Douglas’ leadership,” said Dr. Carrington.

Quoting from his Foreword, that the “˜scope of this speech collection covers many issues, but all show the rich insights, diversity of thinking and unique leadership abilities presented by Dr. Douglas, which enables him to grapple with complex issues and to present viable solutions, the CARICOM Secretary General said he was honoured to pen the Foreword for “Coming of Age.”

Dr. Carrington noted that Dr. Douglas holds the key portfolio of Human Resources, Health and HIV/AIDS within the quasi Cabinet of the Caribbean Community and credited the St. Kitts and Nevis leader for his “outstanding chairmanship” of the PAN-Caribbean Partnership Against HIV/AIDS (PANCAP), a unique network of national, regional and international stakeholders.

“On the two occasions that he was Chairman of the Caribbean Community in 2001 and 2007, Dr. Douglas brought enthusiasm, commitment and insight. This is the same disposition that he displays in his Leadership role in the OECS and St.Kitts and Nevis. This passion is widely illustrated in the speeches that fall under the theme: “Regional Affairs and International Affairs” and the stance that he takes representing St.Kitts and Nevis, the OECS and in the International and Regional arena,” added Dr. Carrington.

“Not surprisingly, Dr. Douglas has gain great respect from a wide cross-section of Regional and International bodies and continues to ensure that as small as St.Kitts and Nevis is, he engages the world stage. That was fully exemplified when St.Kitts successfully hosted the mega CARIFESTA festival in 2002. This is also fully manifested in the proliferation of accolades that has been showered on this distinguished Caribbean leader. Among them are the Lifetime Achievement Award by the Caribbean Tourism Organisation, the international and prestigious Gandhi-Ikeda-King Peace Award and the Global Award. In addition he has received the Trumpet Award for outstanding contribution in the field of HIV/AIDS; the Legacy Award for outstanding regional leadership awarded by the United States Congressional Black Caucus and the American Foundation for the University of the West Indies Award,” noted Dr. Carrington.

He said that he felt obliged to highlight the essence of Dr. Douglas behind the profound thoughts that drew from “Coming of Age.”

Among the distinguished persons were Governor General of St. Kitts and Nevis His Excellency Dr. Sir Cuthbert Sebastian; Deputy Prime Ministr Hon. Sam Condor and Cabinet colleagues; Speaker of the National Assembly, the Hon. Curtis Martin; Premier of Nevis, the Hon. Joseph Parry; Professor Neville Duncan, the local Diplomatic Corps, representatives of the business sector and a wide cross section of the local and regional community.