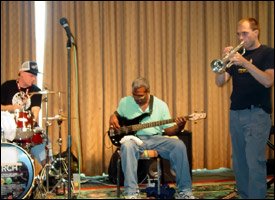 Scores of independent and affiliated local musicians will once again have the opportunity to learn from some of the world’s best at this week’s Music Festival Workshop.

Now entering its fifth year, the workshop sessions are organized to provide a hands on, interactive forum for locals to learn from veteran international performers that tour the world. Last year, members of the John Legend Band and others shared their experiences while performers from the Regina Belle Band will facilitate classes this time around.

Nigel Williams, Music Specialist in the Ministry of Culture, told SKNIS that the one-day session is scheduled for Friday, June 26, at the Royal St. Kitts Hotel (formerly Jack Tar) at Frigate Bay. The event begins at 3:00 p.m. and will cater for approximately 60 persons.

“We have had tremendous success over the past four years and have consistently received positive reviews,” he said. “I expect this year will be no different and we are looking forward to partnering with local and visiting artistes.”

Mr. Williams added that this was another tangible spin-off of the St. Kitts Music Festival. He noted that the while the workshops are open to everyone, a concerted effort is made to attract young musicians from St. Kitts and from Nevis.

This year’s training will include persons from high school bands, the Defence Force Drum Corps, and popular groups such as Kollision Band.

Mr. Williams disclosed that in recent times there had been a marked improvement by local musicians after participating in the Music Festival Workshops.

The Music Specialist made an appeal for interested persons to contact the Ministry of Culture to seize on the opportunity to share experiences with top professionals.