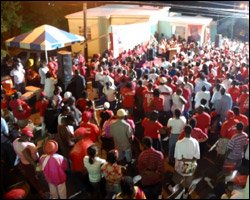 There has been a resurgence of young people showing full solidarity with the governing St. Kitts-Nevis Labour Party and barrister at law, Ms. Marcella Liburd says the Labour Government’s policies have led to young people not only educating themselves but becoming owners of land, homes and businesses.

Speaking at a public meeting in Tabernacle last Sunday, Liburd, the lone female candidate told the huge crowd that she supports the view of the Party’s Deputy Political Leader and Deputy Prime Minister Hon. Sam Condor that the upcoming general elections, constitutionally due by October this year, is about the future of the twin-island federation.

Ms. Liburd referred to the recent appointment of her successor, the Hon. Curtis Martin.

“He is not only the youngest person to sit in the Speaker’s chair in St. Kitts and Nevis, but he is also the youngest Speaker of a lawmaking body in the Commonwealth Caribbean, the Commonwealth and the world,” said Ms. Liburd, who has replaced the retiring Hon. Dwyer Astaphan as the Labour Party candidate for Central Basseterre (Constituency #2).

“The young people are noticing that and they are saying this is not just talk. It means that this Labour Government and Labour Movement recognise that young people have a major role to play in the social, educational, economic and political development of this country. They are taking note” said Ms. Liburd.

She said that another example of the Labour’s commitment to the youths of St. Kitts and Nevis is the recent selection of two young candidates to join the platform of the St. Kitts-Nevis Labour Party.

“Look at them here. The presence of Glen “Ghost” Phillip and Dr. Norgen Wilson is testimony that we are just not talking. We are also walking the walk. And the young people are saying that Labour is really serious about young people. These people believe that young people have something to offer the country and that is why they are being placed in positions of responsibility and positions of authority. Whether it is the Party or the Government, we realise that it is young people time,” said Ms. Liburd.

She said too that the Youths Empowering through Skills (YES) programme is a programme that is designed and dedicated to over 1000 young people.

Ms. Liburd used the opportunity to encourage all the persons involved in the YES programme to do their very best to acquire the necessary skills and work ethics so that they can become employed permanently.

She warned that the global financial and economic crisis was affecting the world including St. Kitts and Nevis, “but when you check out the figures, at this particular point and time, St. Kitts has about the lowest unemployment figures of about six percent.”

She pointed to the fact that with a Labour Government in office, more young persons have become owners of land, homes, businesses, property and other tangible assets.

“I have a friend who started a business at the age of 18 years. He left school and went straight into business. He became a CEO at 18. He is now 20 and his business is striving, up and running, because the enabling environment is there for people like him to own and operate a business.” said Liburd.

“There is another young man who is successfully running an on-line business. He is in his early 20’s and so the young people know that the Labour Party and the Labour Government has created and continues to ensure young people make use of the opportunities that are available.

She said all 8 constituencies on St. Kitts have a Young Labour group with a vibrant National Young Labour Movement.

Ms. Liburd pointed to the large number of young people attending the Tabernacle Meeting as evidence of the resurgence of young people supporting the Labour Party events as further  testimony that the future and growth of the party is assured.

She said it was because the Labour Party cares about the future of young people that the Government not only talks but walks the walk.

Liburd said the Labour Government’s provision of over EC$81 million to 1,676 young people to obtain loans via the Development Bank of St. Kitts and Nevis in 14 years compared to 150 loans amounting to less than EC$1 million is another testimony that Labour cares about young people.