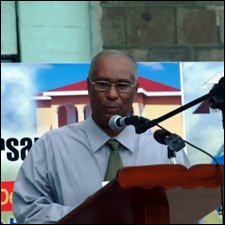 Premier of Nevis, the Hon. Joseph Parry described the Nevis Housing and Land Development Corporation (NHLDC) as an organization that had served the people of Nevis well. The comment came when he delivered the feature address at an event to launch the organization’s 25th Anniversary celebrations on Friday in Charlestown.

He reflected on the Corporation’s history and singled out persons who had contributed to its success.

“We as a people must congratulate, Mr. Arthur Evelyn who was the first Minister who served in the Corporation and Mr. Hastings Daniel who worked very hard to get Nevisians a piece of land or an affordable home,” commented Premier Parry.

He said that the Nevis Reformation Party (NRP) in 1984 had promised the people of Nevis, that every Nevisian would be given the opportunity to own land especially small farmers.

When the Corporation started, its main objective was to sell land to the people of Nevis and in addition to that, Affordable Housing came years later.

“Take a look around Nevis and examine  Prospect, Maddens, Potworks, Hamilton, Spring Hill, Nisbetts[and] Eden Browne and one will see the lovely housing areas developed by the Nevis Reformation Party, remarked the Premier.

The Premier noted that in the Parish of St. Thomas there was no estate land available.  Therefore, the government of the Nevis Reformation Party (NRP) purchased land to afford the people of St. Thomas the opportunity to acquire property at an affordable rate.

Today, the Nevis Reformation Party through the Corporation has focused on affordable housing for the people of Nevis.

The ongoing Cherry Gardens project has also provided employment for over 200 persons and so far almost 100 houses have been built.

The Premiers points were  re-enforced by the Minister of Housing in the NIA Hon. Robelto Hector  when he said that the houses are well built,  modern, spacious and affordable, they are unlike the houses constructed under the previous administration.

During the launch Mr. Hector remarked, “These new houses are tiled and equipped with cabinets and closets, so a buyer only needs to bring their furniture and move in!”