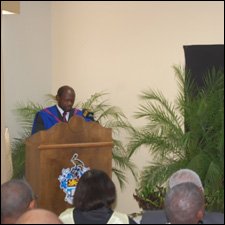 The late Jamaican academic and cultural icon, the Hon. Professor Rex Nettleford personified “those standards of excellence that are key to the maximization of human potential anywhere, and conveyed that dignity and that confident self-restraint that are essential to the advancement of societies the world over.”

“How can we best honor Professor Nettleford? We can honor him best by reflecting on the ideas by which he lived”¦…and by giving meaning to those insights which he, while he still had breath, presented with such confidence and dignity to the people of the Caribbean ““ and the world.  And in keeping with this, I will reflect, this morning, on the importance that he forever urged us to place on self-respect, on history, and on culture,” said Dr. Douglas to the gathering at the Open Campus, The Gardens in Basseterre.

He said: “In his proclamations about our responsibilities to ourselves and to each other now that we are fully independent nations, with complete power to determine the direction of our countries and our societies, Rex Nettleford reminded us that “without self-respect, freedom is empty.” Families, individuals, and nations alike should remember well his warning that “those without self-respect will lack the self-confidence to make full sense of freedom. Not only did he stress self-respect, he was “self-respect.”

“In addition, possessed of a rare and expansive intellect, Rex Nettleford also understood, far better than most, the importance of history and an awareness of one’s origins, to the stabilization, and indeed the forward movement, of all nations and peoples.  He was impatient with those who believed that everything of value was to be found either in the “here and now”, or in our tomorrows,” said Prime Minister Douglas.

He continued: “Rex Nettleford was troubled by those who did not understand power of history to teach us what to avoid”¦”¦what to embrace; to help us to recognize past traumas re-emerging in new forms”¦”¦..or past positives presenting themselves once again, though sometimes in disguise.  Indeed, Rex Nettleford, whom we are here to honour today, spoke and wrote extensively on the importance of Caribbean people “not indulg[ing] in that blasÃ© sophistication which drives too many to go full steam ahead, led on only by their headlights, without glancing periodically into their rear-view mirrors.”  May we, as a Caribbean people, forever take his insightful and visionary words to heart.”

“Finally, keenly aware of the importance of the arts to the development of the human soul, and keenly aware of the importance of the human soul to the full flowering of our God-given potential, Rex Nettleford co-founded the National Dance Theatre Company of Jamaica, an entity that to this day magnificently displays to the world the beauty, the creativity, and the unique and inspiring specificity of the Jamaican soul.

The strictures of colonialism were no match for the expansive mind and spirit that would propel Rex Nettleford from primary school in Jamaica to graduate school at Oxford; from advisory roles at home to advisory roles at many multilateral agencies, including the UN; from being honored throughout the region to being honored far, far beyond Jamaica’s shores,” said Dr. Douglas.

Prime Minister Douglas noted that one of Rex Nettleford’s greatest gifts was his keen insights into the ways in which culture shapes the fate of a people.

“And at this moment in the social evolution of the Caribbean, this is a point that cries out for far greater thought, and discussion, and attention.  He understood, when many did not, that a nation’s singers, dancers, and artists are, in fact, activists ““ for good or for ill”¦”¦..whether they know it or not”¦”¦..because they shape the souls, and affect the minds, and shift the standards and behaviours on which societies are built,” he said

Dr Douglas quoted from a tribute to Rex Nettleford, delivered by his dear friend and colleague, Professor Edward Baugh, in Jamaica, on February 16th 2010: “˜”¦.all of his work was driven by one great purpose: to promote self-knowledge and a creative sense of self-worth in the Caribbean person, a self-confident sense of identity-in-community”¦”¦In him, the artist and the activist were one”¦”¦.’

Said Dr. Douglas: The man we gather to honour this morning helped us to analyze and understand Caribbean history from our own perspective, and in the process, helped us to understand not only who and what we are, but, just as importantly, who and what we can be. Though we can never repay that debt, let us, in the way we live our lives, and in all that we try to help our people to be, forever try. Thank you, Rex Nettleford. May your soul know eternal peace.”